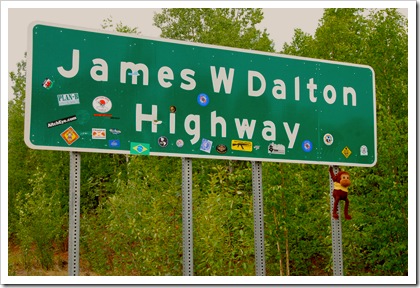 One month ago we set out from Denver for the great wide open wilderness of Alaska.  Before leaving, Craig and I conducted considerable research on the last section of road to Prudhoe Bay named the James W. Dalton highway.  I found a website with an entire page devoted to the road named The Dalton Highway, “The Haul Road.” It professes early in the write-up, “This is not a road for the faint of heart, or those with a brand-new vehicle!”

Okay, heart is not faint, check. Road torn, far from new vehicle, check. As it carries on, the warnings get more stern.  A paragraph entitled – Driving the Highway Yourself (Not Recommended) warns potential drivers:

“Don’t even consider driving the Dalton unless you have 4-wheel drive, a CB radio, extra fuel, food, tires, and a trunk filled with supplies. This is grizzly country, so when camping, keep a clean campsite, storing food at least a quarter mile from where you sleep.”

On the drive to Montana Craig and I had research to compare with fear in our hearts. “Man the Dalton is going to be crazy,” Craig said to me. Thoughts of grizzlies ruling the road and huge rocks flying at the windshields with out-of-control truckers careening towards us at break-neck speed were in our minds. “We are going to be in for it, one last crazy run!” I replied to Craig. Two years of experience and the fuel warning in the article had me believing, without a doubt, that we would have another stressful run of nearly choking the engines out of gas.  Without question, Nels and Craig would be standing on the side of the road on Grizzly lookout while I furiously changed tires at the mercy of a Griz waiting for his moment to grab me as food.

All the way up there we heard stories from people about how bad it was, how dangerous it would be and how crazy we were for doing it.  Then came departure day.  The night before we stocked up on food, water and supplies, as we had been instructed.  On our way to the start of the highway, knowing that 500 miles of off road supposedly full of corrugation and potholes laid ahead, my body was physically ill, knowing the day would bring a beating like I had felt on the bad roads passed over the last two years. I informed Craig of my distaste for the road ahead.

“I am not looking forward to this.  It is going to bring the pain.”

“Stay positive,” he replied. “I am excited about this, it is going to be sweet, yeah!!”

I could have slapped him in disgust for his excitement over 1000 miles of bad road.  I thought, “Rookie, he will see what 1000 miles of bolt breaking vibrations can do to your mind.”

At the beginning of the road, a sign denotes the miles ahead and informs that it is time to drive with the lights on, even though the sun stays up 24 hours a day.  For sure this must have been due to the crazy truckers that would likely be running us off the road. 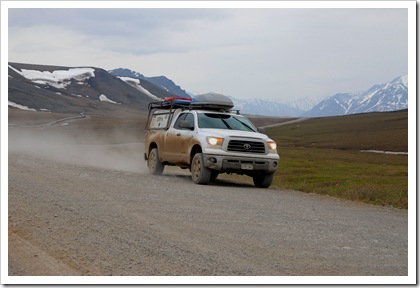 Then came reality.  About 20 miles in, the road went back to pavement.  For the next 500 miles it did the same, going back and forth to gravel and pavement. While it was no small feat of a journey, it certainly was not the picture that had been painted in my head. The roads are clearly beaten down by the overloaded trucks, constantly moving permafrost, –70 temperatures in the winter, and the regular precipitation.  This leaves a varying degree of smoothness from new pavement to giant whooping dips that could send you airborne into the soggy earth lining the sides of the road. After the first 200 miles, it seemed likely, the road beyond Coldfoot would prove to be the bad part.  After Coldfoot, the road did not really change, but the loneliness quickly set in.

The sky turned a dark shade as rain clouds filled the sky.  While the road was not nearly as horrible as it was made out, the isolation made each mile turnover on the odometer as though time stood still.  At what seemed the halfway point, the signs still warned of a mountain pass ahead and 300 more miles.  Constantly under construction, the road was filled with huge oversized hauls passing regularly that could easily send small “4 wheelers” like us off the road, but crazy and out of control they were not.  In fact the pilot cars that proceeded them were very courteous providing ample warning to pull 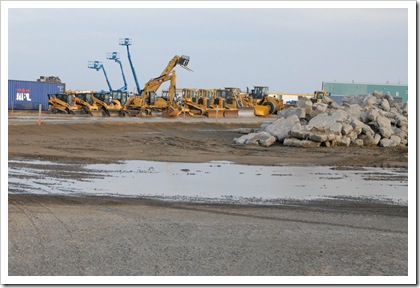 off in good spots to let the “18 wide by 150 longs” pass.  So while it was not the exciting near death passes anticipated, it was a great lesson in speaking truck after using the CBs more for these 500 miles than any other part of the expedition.

The long-lonely 14 hour half off-road drive ended at Deadhorse.  With a daily high temp of 38 degrees, it had already dropped below zero while we toured around the town at 11PM. Here in Deadhorse not a restaurant or bar or store or anything that resembles a town center exists, because not a single resident lives there permanently.  Most workers are on a 2 week on 2 week off schedule, and it was easy to see why as we made our quick round of the town.  The sun did not drop below the horizon, but instead illuminated the post apocalyptic steel structures and trailers that made up the architecture of this final destination of the expedition.  The yards of all the company camps overflowed with huge heavy machinery and industrial supplies for drilling rigs. 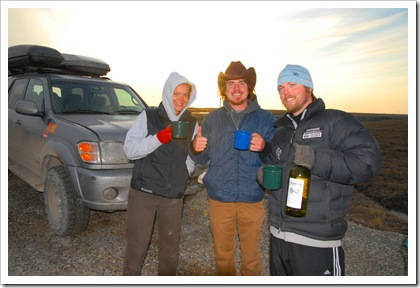 That night, if it can be called that with a full sun in the sky, ended with a drive back out of town to a frozen bog next to a ice-chunk filled river where we cracked a celebratory bottle of wine while shivering while setting up tents. Earlier from our research, we found it was to be a full moon, but the bright sun drowned out any sightings of the moon while the freezing Arctic winds ripped through our clothes. However, still was a nice way to finish, knowing the moon was up there somewhere sharing the sky with the sun. Nothing could bring us down as no victory after a near two and a half year struggle across 69 borders can be soured. While Deadhorse proved to be quite possibly the worst place over the entire 80,000 mile journey, the midnight sun in this alien land cast an excellent light over our final triumphant cheers to the last frontier of our journey

While the end of the road was bleak, the journey and return trip proved to be a highlight.  As the road wound next to the pipeline through Coldfoot up to the Arctic, it crossed the mighty Yukon river, the Arctic Circle, and Atigun Pass  through jagged mountain peaks and thick forest crossing smaller rivers over and over again. 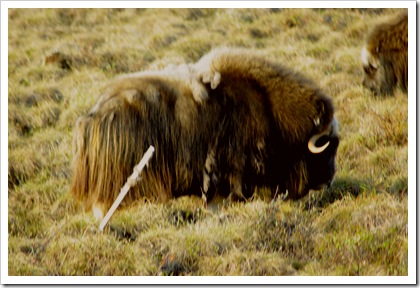 The summit of the pass lead us to the North Slope and all the animals that live there including Caribou and the funky Musk Ox that looks like a buffalo wearing a robe. Very few people live along this road, but those that do had already read the article about us in the Fairbanks News Miner before we started the journey back, so our successful journey had us received in Coldfoot and Fairbanks like stars.  Unlike our un-climactic cross of the US border into Houston, this milestone produced a sense that the journey meant something to the community that surrounded us.  Stops at coffee stands and truck stops granted free cups of coffee and cheers from those who knew we had just accomplished a great feat.  “You are those world adventurers,” said the enthusiastic staff at the front desk of the Pikes lodge that hosted us on our return. They agreed to give us a congratulations dinner on the house, and later the waitress confessed that she was nervous to serve the stars she had read about in the paper a few days prior.  The reception of these kind people put the icing on the cake for an expedition finale to remember.

That 1000 miles was the last tough stretch of road on a journey that has ventured through the highest highs and lowest lows of my life.  I have seen the most beautiful sights and the most discouraging situations.  The road has led me to encounters with the best and worst people out there, but there is no doubt that it has changed my life, and I like to think that maybe it has changed a few minds out there as well. I finish this post as we race down the highway on our way home to Denver  .  This is the first time in over two years I can actually say this…“Mama I’m coming home!!” 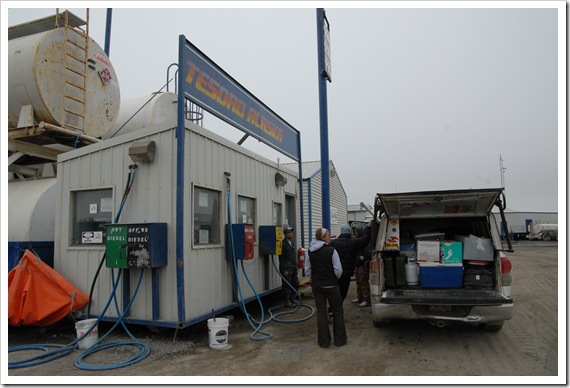 Gassing up for the journey home 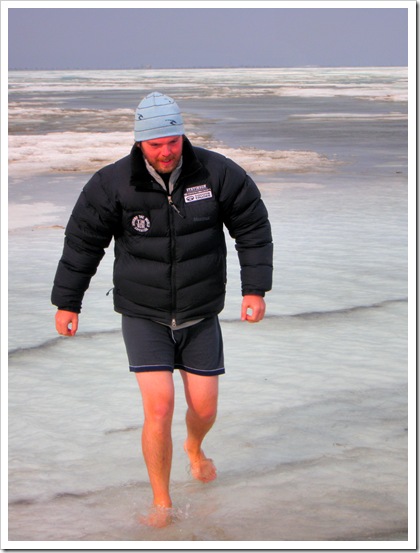 Was it really necessary for Craig to take his pants off at the ocean? 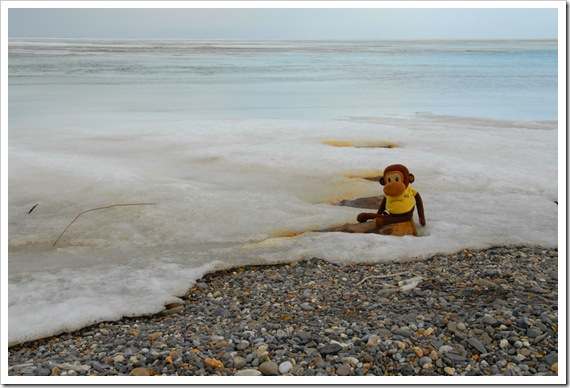 Swinger insisted on his own photo at the ocean. 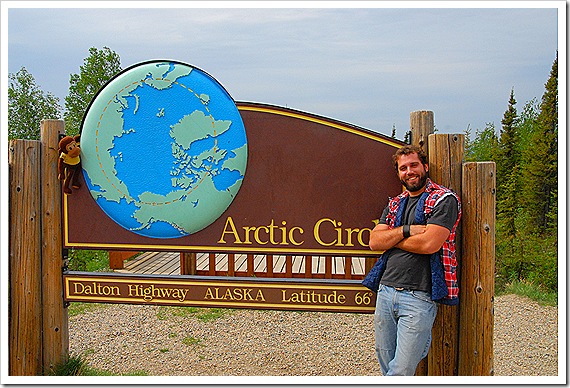 Swinger, you little rascal, you were not supposed to be in that photo! 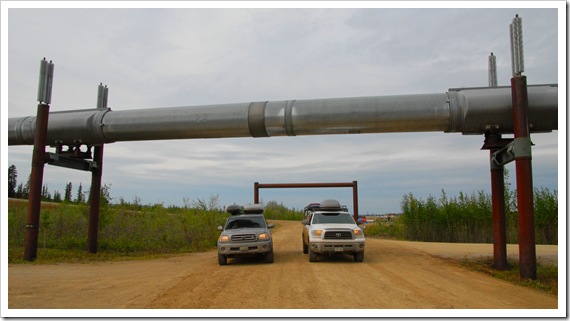 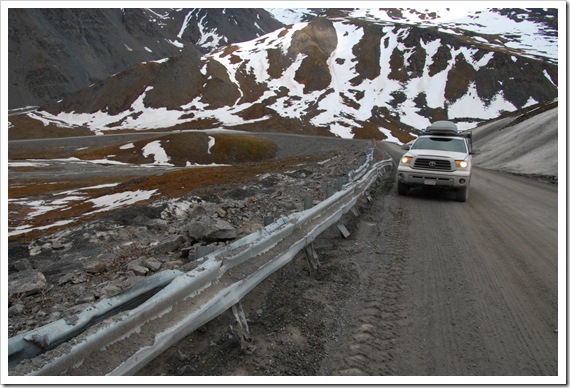 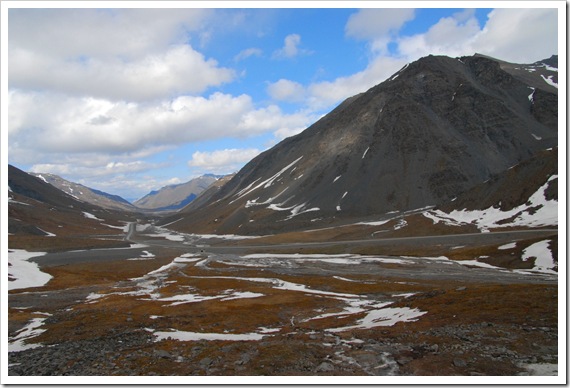 The beginning of the North Slope