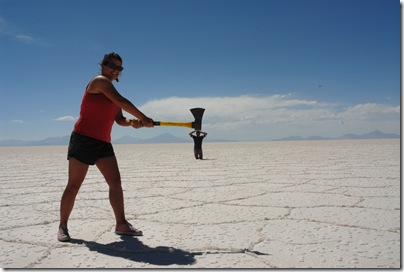 It is a hard road out there. Nearly everyone has cracked at some point, including me and Bouey.  We have had a handful that vowed a desire to finish the expedition with us, we have had a handful that realized quickly this was not for them.  Being part of the crew is not like traveling, it is not like vacation, it is a job…without pay, other than the experience of a lifetime.  And it is a seriously difficult job.  Each day we get out there deal with police checkpoints, crossing international borders, driving on terrible roads.  Often a day that was supposed to take 5 hours turns into ten, and since the last 7 months since Melissa joined have all been in Spanish speaking countries, it is up to either Melissa or I to translate everything that happens.  After an exhausting 12 hour day, most would want to take a shower and go to bed, but all of us have to keep after it, writing blogs, planning the next segment, or cooking dinner in the dark while setting up camp.  Month after month we are all far away from home, I don’t think any of us would trade the experience, but when things happen at home, bad or good, we are not there to be with our friends and family.

For the last 7 months, Melissa has endured a longer stay as part of the crew than anyone else to date, and for over a month, she has been the only girl with 5 ridiculous boys giving her a hard time every day. With all of the trials and tribulations The World by Road has to offer, she has put up with it, but the time has come for us to say goodbye. After 7 months, Melissa is not quitting, but unfortunately needs to head back to Atlanta to take care of some things. However, her strength has officially earned her the award for the most time on the crew. Luckily enough for us unruly boys, another woman has joined on to keep us in line.  Her name is Celeste Tenuta, from Denver, Colorado.  She joined us in Puerto Vallarta and will be making the journey up to Alaska to finish the expedition with us. Does she know what she is getting herself into? I am sure Melissa can give her a few pointers.

This entry was written by Steven Shoppman, posted on March 29, 2009 at 7:17 am, filed under Expedition Updates and tagged adveture, Bolivia, celeste tenuta, join an expedition, melissa terry, uyuni salt flats. Post a comment or leave a trackback: Trackback URL.