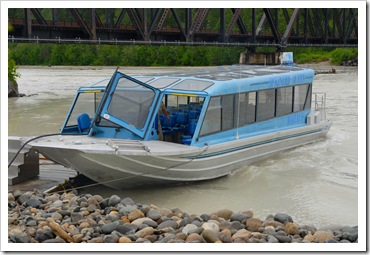 “Can’t beat a day on the water,” said Nels. I’m not sure which one of us was the first to say it, but it has become a common occurrence due to our many water based adventures lately. Recently, during our visit to Talkeetna, we had two such opportunities. The first was jet boating the Susitna River with Mahay’s Riverboat Service.

It was one of those days, neither warm nor cold, not raining but looking like it might at any moment. So, we had a hard time choosing what to bring with us on the spacious jet boat. I had no idea what to wear. Would it get colder or warm up? Was it going to rain? Should I expect to get wet anyway? Usually I err towards the side of caution so I ended up bringing my rain gear, winter hat and gloves, and extra clothes. During the first hour of the trip I definitely did not need all these things. Our Captain, Israel, a local born and raised here, described points of interest along the river and also told stories about his own family’s ties to Talkeetna. For example, ice on the river builds up so much that all the trees in certain sections of the river are missing bark from the ice constantly scraping up against them. 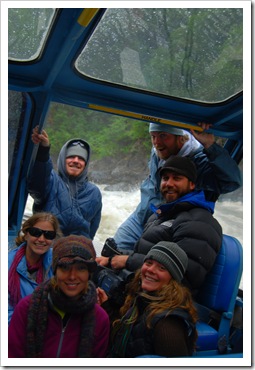 Finally, we reached our destination. We were told to buckle our seatbelts and soon we were headed into a canyon where the rapids are fast moving and dangerous indeed. Israel skillfully maneuvered the boat as far as it could go, and right up to a rushing waterfall, small in height but extremely strong. While he held the boat in the toilet bowl action of the surrounding water we were encouraged to head to the open bow and stern of the boat to really experience the power and noise of the water around us. It was here that my preparation came in handy as we were splashed with water and cold air as it rushed through the canyon. The power of moving water never ceases to amaze me and there was no doubt that we were doing something extraordinary by, at least for a few minutes, beating the forces of nature. Steve, as the main camera person, often gets to do even more extreme things to get footage of our adventures. This day would be no different as Steve boarded what seemed like much too small of a boat to head back into the rapids. He would be climbing on some rocks at the entrance to the canyon to film our next attempt at defying nature. Into the rapids we went again for the benefit of the camera.

Unfortunately, it was time to start heading back. After so much excitement, we needed some entertainment while waiting for the

adrenaline level to return to normal. The answer came in a few parts. First, our hosts served a scrumptious pre-packed lunch of a big sandwich and potato salad. Second, we had a little informational stopover in which our guide showed us around an old trapper camp and talked about the interesting style of lives that the trappers led. In order to end the day on a high note, Captain Israel did something that I used to call a power slide, involving getting the boat up to speed and then doing a 180 degree turn while sliding across the water. An exciting way to end our day for sure. Thanks to Mahay’s Riverboat Service for a great day on the water.

More photos from the day… 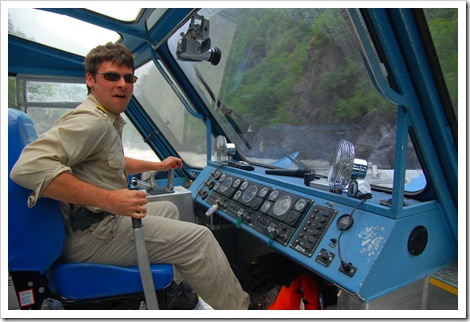 Our Captain, Israel, working the controls. 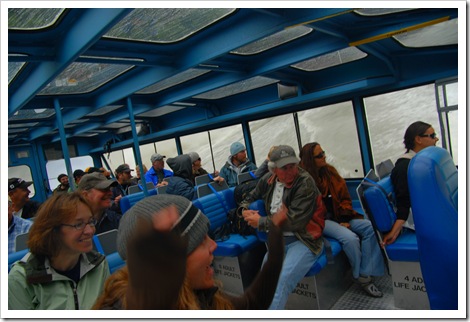 Bracing ourselves during the 180 degree spin. 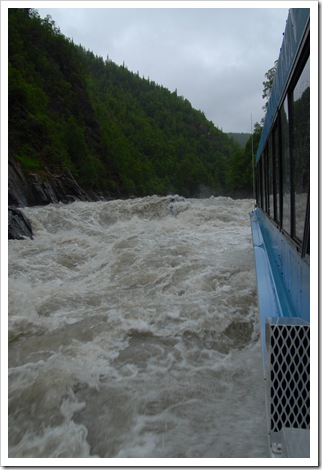 Our jet boat was right in the action. 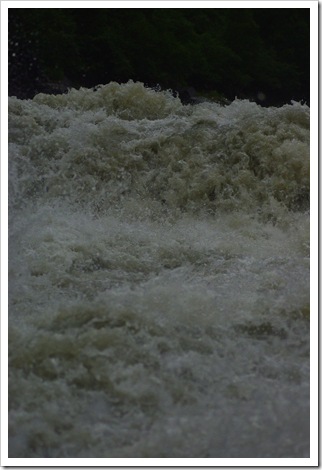 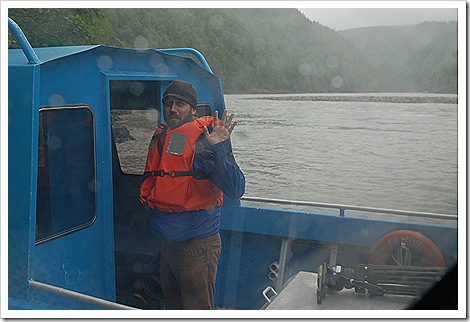 Steve looks kind of worried about going into the rapids in the small boat. 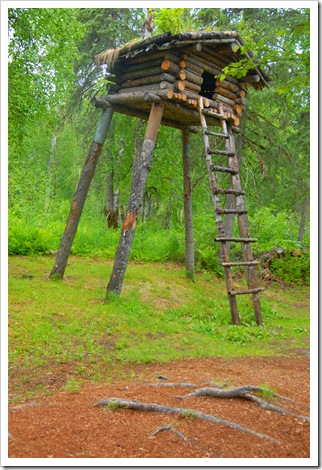