And back to New Years Eve, or should I say new years month?

As we approached Christmas, it seemed like nothing really changed.  Being close to the equator, no snow was falling, no Christmas trees were decorated, and while the spirit of Christmas was still in the air, its presence was was more known than felt.  South America seems to keep Christmas as more of a religious and family holiday, but the introverted family times turn into an absolute free for all once the bell rings in the new year.  We believed the New Years celebration in Banos, Ecuador was at the top of the charts for festivals and parties we have encountered since we started, but the inaugural new years night night has now turned into a month of festivals.

It is not that these festivals and celebrations are planned in any way that makes them more extravagant or interesting.  It really is more about the people and the level of tolerance that these cities have to accomplish a full city takeover event.  For us, we started New Years 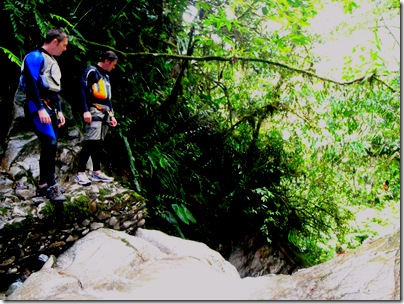 Day thinking, “excellent we will go canyoning today, have a good dinner and do the usual…go out, have a bunch of drinks, maybe champagne at new years and call it a day.” A few people I ran into the week before told me stories about how Banos is still a fun party with many people in the streets, but that it is tame compared to a lot of other places in Ecuador. A specific reference from a couple of US expat river guides explained, “It is a lot more calm than the beach town we were in last year, we really like it here because it is still wild but not completely insane.”

That morning when we left with our guide to go canyoning, I could not have been more excited…we were on our way to the canyon in the jungle, a wild, but not insane party was scheduled for later, and the Monte Selva Spa was waiting to dip in before heading out for the night. The canyon turned out to be excellent. The start was a 30 foot jump into a pool no wider than 10 feet with a waterfall above and below the pool. I looked to the guide and he told me, “You must jump out there, but not too far, or you will be in the shallow part.”  Okay doesn’t sound too bad, I thought. He continued, “The current is very strong, so you need to swim away from the fall so you do not get sucked under, but be careful to not go to far and fast or you will end up over the other fall.”  That other fall was about 60 feet.

Adrenaline pumping, we all started our New Years Eve morning with a death defying jump into the first pool.  One after another we jumped while the guide was harnessed in tossing a rope to each one of us to help make sure we did not take a plungoroo over the second fall.  The next step had all of us lined up for a guided rappel off of the second fall.  Since I used to guide canyons, I acted as the assistant guide rigging the top of this maneuver and our guide, Daniel, rigged the bottom. I was a little rusty mistying the appropriate knot about 5 times, while Darrell, Craig and Bouey watched me. 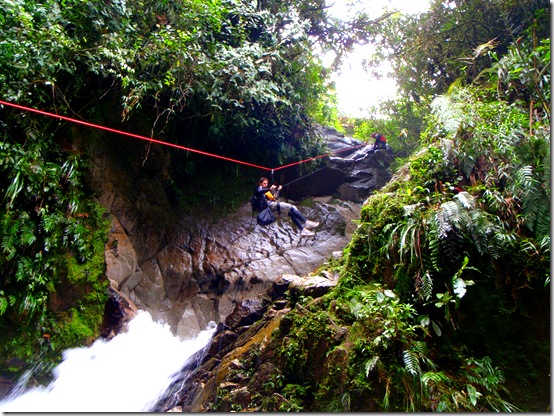 Likely this did not inspire confidence for their descent on this line 60 feet above the ground relying on my doble ocho knot as they call it down here, but hey, it had been well over a year since we last did a canyon and a good 4-5 since I tied that knot.  And since I am writing this blog now, obviously the knot worked out. Another few rappels later we reached the bottom of the canyon where it opened up to the big river at the bottom of the main valley. With six or seven pools along the side of the river there was a path making its way back up to the top where we parked the truck. As we followed the path, we could see that the pools were full of huge trout. This was a fish farm and the owner was right there tending to his fish.  We said hello, Daniel and the guide were friends, so we all shook hands and went to the top.  After getting out of our wetsuits and gear, Daniel informed us that we needed to pay a dollar each for parking.   We talked to the owner of the restaurant/trout farm and he agreed that we could have some food and beers in place of the parking fee. 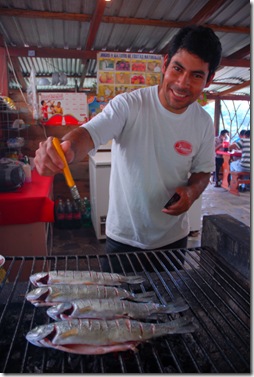 An hour later all of our mouths were salivating to one of the best smells that has ever passed my nostrils. Four huge fresh trout that had just been snatched from the pools were on the grill getting basted with marinade and the owner was overjoyed to be filmed as we thanked him over and over again for fixing the best trout any of us had ever had. With full bellies we were on our way back to town smiling and talking about the night ahead. On the way we were stopped by a transvestite rebel roadblock, well actually many of them.  It seems that the time honored tradition for males in Ecuador is to dress up as women for new years, stop passing cars and try to get a toll of pocket change out of them.

At first it is a little uneasy when a bunch of young guys with short skirts stop your car, talk like women and generally get up in your business. The first time they do this you have no idea what is what to think, but as time goes on you learn to just roll the windows up and push your way through.  Then come the kids that are dressed up as a myriad of other things from princesses to gorillas, all with their hand out as well.  As the night progresses on, more and more lunatics come out dressed up, some even have props like fake construction road blocks.

By the time 9 or 10 o’clock comes around the streets are crawling with tons of people, stages are setup with music playing, and the streets are lined with paper mache statues of cartoons, super heroes, villains and more.  Two story Homer Simpsons, Spidermans, Jokers and more were painted up and ready for…And that was our question. What is the deal with these?  Why are they all over?  Why has everyone put so much work into seemingly random temporary statues?  Then we found a haunted house, which turned out to be one of the better ones I have ever gone to. It was raising money for the church, with a bunch of wackos running around with chainsaws, mad scientist get-ups, and people sawed in half lying on the pavement.  Very Christian.

As the night led on, and midnight approached, we started to get a little bored.  How much longer would everyone run around dressed up like trannies and monsters before something cool would happen?  Just about the time the boredom was setting in, the grand finale came. Fireworks started going off everywhere, but not the professional high in the sky kind, no no, the watch out it is coming for your head kind.  Or the run of the mill, ouch that firecracker just blew up a little too close to my ear kind.  So our next move-buy some of our own. Darrell ran over to the vendor on the street, got a handful, and we were pyromaniacs for the next half hour. When the chaos of it all progressed after midnight, the moment we had been waiting for arrived.