Into The Alaskan Wilderness 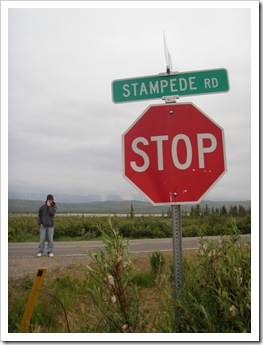 Off in the distance were rapids.  The Teklanika River raged.  The volume and force of the water was powerful.  There was nothing that could be done.  We were 16 miles out on the Stampede Trail, now called the Stampede Road, 8 miles from the “Into The Wild” bus, and there was nothing we could do.  Craig, with a rope tied around his waist, attempted to wade across, but to no avail.  It could not be done.

My eyes looked across the river and I envisioned Christopher McCandless, who years previous, was unable to cross this same river, forcing him to return to the bus in which he was living.  I felt for him.  I could not even imagine the feeling he felt, coming up to the river, trying to get out, and then not being able to.  That sense of helplessness, of not being able to continue on, is more than terrible, and I could see why he went back to the only place he knew out there, the bus.

Christopher McCandless’ story is one of intrigue and mystery.  People debate many points of his story, and many have very strong opinions on the matter.  To each their own, and everyone is entitled to them, but I think there are lessons to be learned from this story, which is one of the reasons we headed to Healy, Alaska. 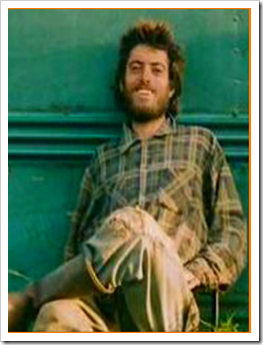 McCandless’ story spans from a rough childhood with a lot of family issues, to a college graduation, to donating his entire savings to charity, to criss-crossing the nation trying to find adventure, himself, and to explore nature by the means of California, Arizona, South Dakota and finally Alaska, where he got his chance to live simply in the wild.  It was here that he hitched a ride on the Stampede Road, and hiked into the wilderness in April of 1992.  His sense of adventure, the sense of not conforming to “everyday” structure of things, and his sense to break out of his comfort zone is something that I believe a lot of us admire.  He lived in an old abandoned bus from April to August in the Alaskan wilderness, with very little supplies, surviving off the land, and was able to document his experience with journal entries and self-photographs.  His intention was to cross back across the Teklanika River in July of 1992, but was deterred by the raging river, which forced him back to the bus.  His body was subsequently found a couple months later in the beginning of September in his sleeping bag, with starvation being the official cause of death, but speculation arises on the exact cause, with some believing it was a result of a poisonous potato seed.

On August 12, according to Outside Magazine, McCandless wrote what are assumed to be his final words in his journal: “Beautiful Blueberries.” He tore the final page from Louis L’Amour’s memoir, Education of a Wandering Man, which contains an excerpt from a Robinson Jeffers poem titled “Wise Men in Their Bad Hours”:

Death’s a fierce meadowlark: but to die having made
Something more equal to centuries
Than muscle and bone, is mostly to shed weakness.
The mountains are dead stone, the people
Admire or hate their stature, their insolent quietness,
The mountains are not softened or troubled
And a few dead men’s thoughts have the same temper.

On the other side of the page, McCandless added, “I HAVE HAD A HAPPY LIFE AND THANK THE LORD. GOODBYE AND MAY GOD BLESS ALL!”

His experience, no matter how you take it, brought about a book (Into the Wild, by Jon Krakauer), a movie (Into the Wild, film by Sean Penn), a documentary (Call of the Wild, film by Ron Lamothe), controversy, pilgrimages to his final resting place, and many discussions on what he stood for, who he was, what he did, and made many people take a good, hard look inside themselves.  The vastness of this rarely happens, but unfortunately noted, is the fact that many times its the result of a tragedy.  On that day, at that time, he made his decision and walked down the Stampede Road, into the wild. 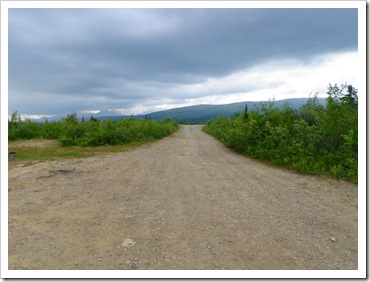 He began his trek on the Stampede Road 17 years ago, and would have had to walk right by Coke Wallace’s place, the last place on the road at that time. Wallace was living in a wall tent, and as he said, “I must have just missed the kid walking by, as I was probably putting up fence posts.”

With the help of Craig, I was able to make the contact with Coke Wallace, an experienced hunter/trapper/guide, and owner of Midnight Sun Safaris in the Healy area, who still lives on the same piece of property.  The majority of his business is guided hunting tours and trapping, but he occasionally brings people out to see the bus.   He was an incredible person to get first hand information from, chat with, hear stories from, and get a guided trip from.  We loaded up his Polaris 6X6 Ranger, and attempted our journey to the bus.  He had warned us from the start that his buddy had said the Teklanika River was raging, but was willing to check it out, for which we were very grateful.  The bus is 26 miles from his doorstep, and the Teklanika River, the troublesome spot, was 18 miles down the road/trail. 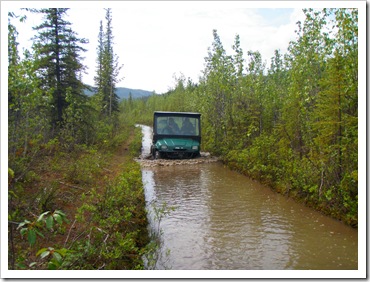 Coke skillfully maneuvered his tough as nails Polaris Ranger through where he believed McCandless was initially dropped off (pictured above), small creeks, mud bogs, and swamps along the narrowing trail.  We successfully crossed the Savage River, but a bit further down encountered the mighty Teklanika River, which would be as far as we would get.  It was so close, but yet so far away.  The bus, only 8 miles now away, was up over the ridge that was right in front of us.  The toughest ATV I’ve ever seen, and even a beyond adventurous/no water fearing Craig, had to bow down to the whims of Mother Nature.

Lessons are sometimes easily found in hindsight, which by no means am I degrading McCandless, but just using his experience to try to help that of others.  It was here, on the banks of the river, that one of the biggest lessons was seen firsthand that one has to truly be prepared to do battle with Mother Nature.  Just as Coke said, “Rivers out here can change by the  hour.  In the morning I’ll wade it calf deep and then come back in the afternoon to come back across and its up to my chest.  You just never know, and got to be aware.”  Being prepared is essential, especially in dire conditions.  Testing one’s self gets a person close to their limits, but one has to be aware of that line, with deadly consequences a possible result if that line is broke. Problems, hard times and family issues find their place in all of our lives, with each person dealing with them in different ways.  Running from them, as many of us do, rarely ever finds its solution.  Taking an issue head on and getting it resolved may be tough, but it can be done.  Youthful souls, as well, sometimes don’t realize the hearts they effect in their actions.  Make sure to make people aware of where you’re at, and tell the people around you how much they mean to you, for one never knows when that time, may be your last. 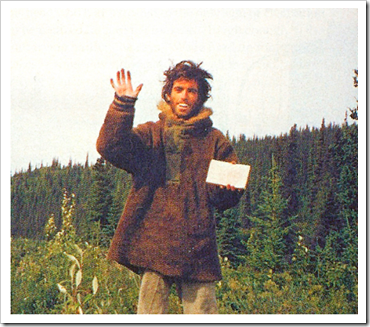 Christopher Johnson McCandless, one of his last photographs 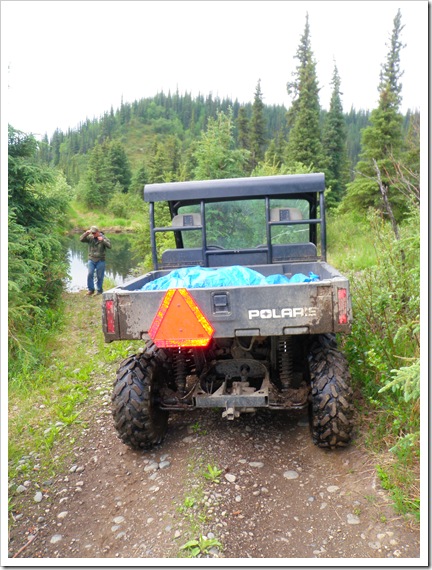 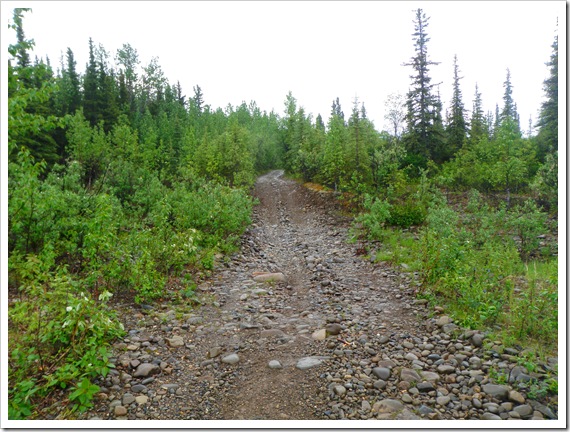 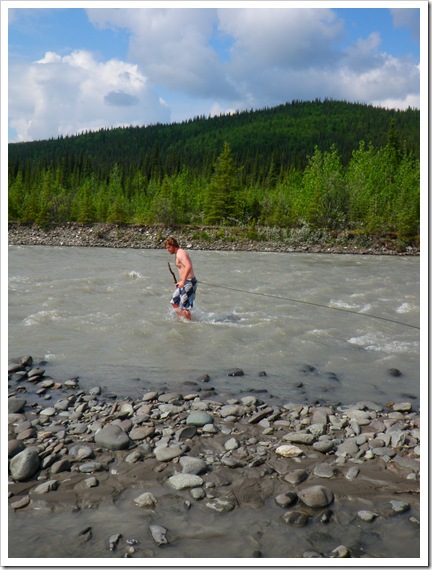 Craig, tied at the waist, begins his attempt to cross the Teklanika River 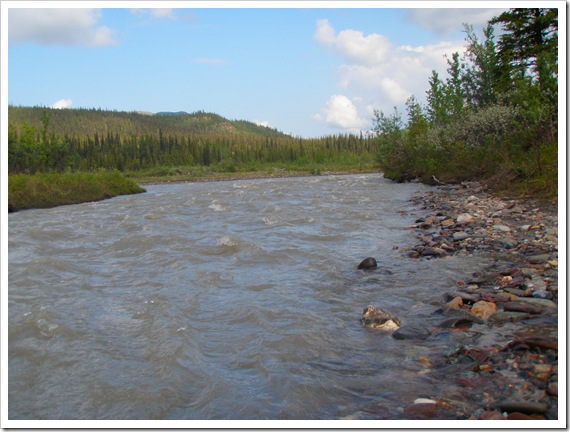 A place a little upstream where Coke sometimes can cross with his ATV, obviously not today with the river in this condition 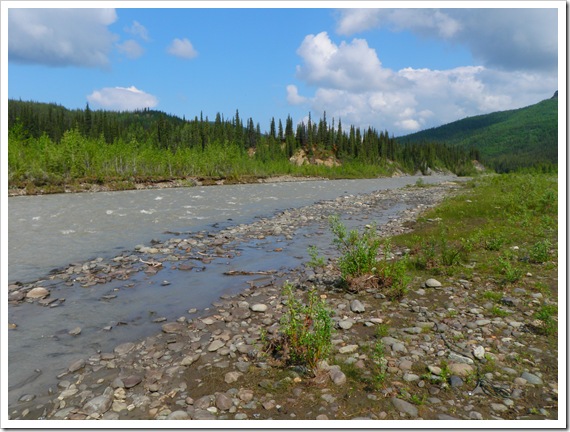 As far as we could make it, next to mighty Teklanika River