The trucks are fixed and, many thanks to PatoPower, we are well geared for the upcoming road conditions of the Atacama, Bolivian salt flats, and the Pantanal wetlands but due to our friends on strike at customs, we left Santiago about 4 days behind schedule.  Chile and more specifically Santiago was a wonderful place to spend a few extra days, despite how the government employees might feel.

The first major highlight of Santiago is it’s geographical location-just one hour from the Andes to the East, one hour from the coast, and filled with picturesque vineyards in between.  People that we met in other parts of Chile voiced that life in Santiago is too stressful, too loud and too hurried-which is true of any city but while it is far from a beach or quaint mountain town, life here actually seems comparably easy going.  Aside from the central business district, it is noticeably clean and well kempt, the metro is highly efficient and the buses can actually go unnoticed.  The majority of the city is situated among a plethora of bright, manicured flora so arriving in Springtime was to our full benefit.  Regardless of what might be just a reaction to the impeccable weather it appears that people here are always this laid back, no matter the season.  This becomes apparent when you notice that, unlike every other city, absolutely no one runs to catch the subway train waiting at the bottom of the stairs…possibly because  A: No one is really bothered to be in a hurry and, B: you can almost feel the mutual respect among one another no matter where you are.

Knowing that it truly takes all kinds, Chileans also seem far less hassled by people surviving on the hand out of others.  For whatever reason, political, economical or otherwise, there are hundreds of people that take to the streets every day to perform in the crosswalks of red lights, or in front of packed sidewalk cafes and bars.   Some are really quite impressive like the cheerleaders tossing each other high in the air while others might serenade your lunch in the fish market. In the eyes of most Santiguinos, those people are providing a service and it is usually the gringos who decide it is better not to throw a couple of coins their way. 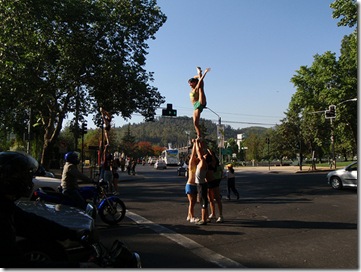 Another thing that this particular outsider feels may contribute to the less harried lifestyle here is the unabashed, shameless public pot smoking.  Aside from certain nations and provinces pocketing the modern world, it is quite rare to see and is something that I certainly had ever heard of in regards to Santiago.  It really just takes one afternoon in any one of the numerous green spaces (no pun intended) to notice what is going on around you…of course some are teenagers after school, but more than that are people 30+ in small groups with their friends, some alone just passing through, some wearing suits and others not, but none concerned with the presence of anyone else.  A second or third afternoon witnessing this behavior and now convinced that no one is in the park for any other reason, will have you google-ing comibinations of “cannabis” “Santiago” “laws against” to try to get to the bottom of it.  More than a few searches yields that it is technically slightly decriminalized, however apparently most feel it’s a suggestion rather than punishable. Hmm.  More power to ya, Santiago!

Casual observances or not, Santiago contains all of your worldly needs but with a refreshingly humble yet proud Chilean vibe and is not to be missed!

This entry was written by Melissa Terry, posted on November 20, 2008 at 10:10 am, filed under Chile, Expedition Sponsors, South America, The Toyotas and tagged chile, PatoPower, Santiago, toyota trucks. Post a comment or leave a trackback: Trackback URL.