I am sure everyone has been in the situation where you think you are going to run out of gas or better yet, have actually run out of gas at some point in your life. Whether it is running out of gas while idling in gridlock traffic or realizing that you have gone past the point of no return on stretch of road where the distance between gas stations is a lot further than you thought, it is an unsettling, frustrating yet all to familiar feeling that comes with driving. Even more so than any other scenario, going on a road trip always seems to attract at least the potential for running the tank dry at some stage in the journey. Road trips and running out of gas just seem to go hand in hand. I can remember many, many years ago taking a road trip with my family from California to Utah to go skiing and running out of gas in the middle of nowhere in Nevada. The story of a road trip is somehow not complete without at least some mention of running out of gas.

So far on this expedition, which is really just one extremely long road trip, we have yet to really run out of gas. I guess technically we have run out a few times, but in the grand scheme of running out of gas stories, I really do not think that they fit in. There was the time in the Australian Outback when we limped into a fuel station on fumes which had also run out of gas forcing us to buy aged helicopter fuel from a bush pilot. That does not count. There was the time in Western Mongolia when we were lost in the middle of nowhere with temperatures well below freezing, had exhausted our reserve fuel supplies and literally ran out of gas as we coasted into town. That does not count. There was the time in Chile when we were crossing the border to illegally smuggle fuel back from Argentina and ran out within sight of the gas station. That does not count. At no point on the expedition have we been stranded in the middle of nowhere agonizing over the reality of a long hike in search of fuel or have we been parked along the side of a desolate road eagerly anticipating the sight and sound of an approaching vehicle to rescue us from our predicament.

Even though we have not really run out of gas on the expedition, that does not mean we have not come close. I would guess that on no less than half a dozen occasions we have motored through the main tanks on the Toyotas and burned through our reserve supplies and were still far enough from where we thought the next fuel station was to sweat a little bit more than usual. We have really squeezed every last drop of fuel and every last vapor out of the tanks of both the Tundra and the Sequoia and have made it farther than we ever thought we could. Our Toyotas, like most modern cars that have been built in the last few years I believe, have a computer that estimates how many miles or kilometers you can drive on your existing fuel capacity based upon micro calculations of the fuel economy and driving conditions over the last tank or two of gas. As a result, you get a display indicating that you have let’s say 246 kilometers of fuel left. However, the auto manufacturers are smart and the computers deliver you a very conservative estimate. After all, the manufacturers do not want their customers coming back and saying that the computer told them they had 100 kilometers of fuel left but in reality, they ran out after only 95 and were stranded in the middle of nowhere as a result. Therefore, when the computer tells you that you have zero kilometers left to go, you have not run out of gas, but it is a strong suggestion that you had better find some soon or you most certainly will.

We have become quite familiar with the zero kilometers left display on the dashboards of the Toyotas. Most newbees on the expedition start to panic when they see the remaining fuel display tick down to zero, but we have seen it many times and have a pretty good indication of how far we can drive before we really are completely out of gas. In both trucks, we have driven about 30-35 miles or around 50 kilometers with the remaining fuel display on zero and the fuel needle pegged to the bottom. That is pretty far when you think about it, so the manufacturers were really being conservative with the calculations the computer makes. We knew we could make it about that far based upon previous trials, but the other day, we had no choice but to determine just how far the Tundra could go on zero. 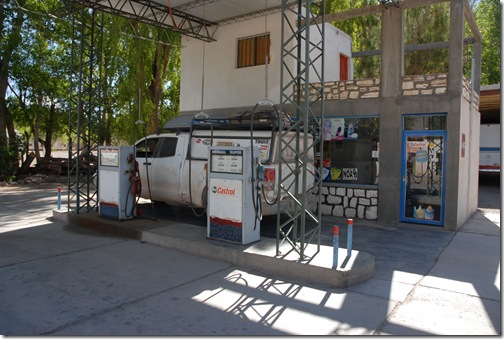 Last gas for a long time

Crossing back into Chile in the Atacama Desert from Argentina proved to be a long and difficult stretch of off-road that zapped our fuel supplies a lot quicker than we anticipated. It was a combination of deep sand, driving in 4-high/4-low, and extremely high altitudes… we crossed two mountain passes that were well over 4,200 meters above sea level, that put us in a situation where we had hit zero on the Tundra yet the next town with a functioning gas pump was over 100 kilometers away. It was not looking good. Fortunately, from our perch at 4,500 meters up on the Paso de Sico, even though San Pedro de Atacama was over 100 kilometers away, it was mostly downhill and the last 85 kilometers into town was paved.

Do not ask me how we did it, but the combination of coasting downhill and the improving road surface conditions, not to mention skillful driving on my part, all culminated in us cruising into town with the engine still running. The final tally… the Tundra made it 62 additional miles (99.2 kilometers) with the needle buried and the computer showing zero. We even had enough gas left in the tank to drive around town four or five times looking for gas. I am sure Toyota does not want this information coming out and I am in no way suggesting that you try and drive your Tundra for another 60 miles when the computer thinks you should fill up, but even though we did not run out of gas, it is a road trip/gas related story that is definitely worth mentioning.

This entry was written by Steve Bouey, posted on November 22, 2008 at 6:11 am, filed under Argentina, Chile, For some laughs, Road Conditions, South America, The Toyotas, Trip Thoughts and tagged Argentina, chile, gas, Road Trip, toyota, tundra. Post a comment or leave a trackback: Trackback URL.