Nature’s beauty gets me every time.  Standing on a peak and looking over the land gives you an unreal feeling, one that flows throughout your entire being.  This expedition has found adventure after adventure, and it has not stopped since we’ve got back to Denver, for Colorado could be called the “adventure state.” 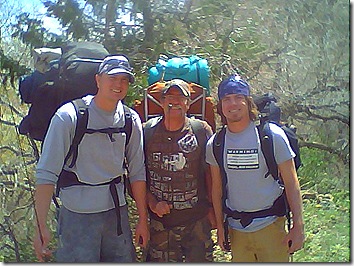 My good buddy Jeremiah Brunner called the other day saying that his father, Jerome, was in town, and it was time to see what the Rocky Mountains had in store for us.  I threw some items in my pack and headed to his apartment.  They were ready, car packed and waiting for me in the doorway.  I would expect nothing less from adventure eager souls.  We got some last minute supplies and headed west on Morrison Road, a mile past the infamous Red Rocks Amphitheatre, and pulled into a modified large shoulder/parking space.  The snow runoff found its places in the river by the side of the road.  There was no bridge, no stepping stones, only the cold, cold, river.  Jeremiah went off on his own to find a place to cross, while Jerome and I picked a spot near a downed tree.  A nearly 52 year-old Jerome took on the river like a champ, and found the best path.  I disrobed into my shorts, put my clothes in my pack, and made my way.  A freezing cold, waist level river was a great way to start the morning.

We gathered on the other side and met a group of three guys about to embark on a journey of their own.  Their education was in the wilderness today, for their seats were vacant at whatever local high school they attended.  They headed out one way, and we found a small, dirt path that would be the guidance to our campsite.  It would be the last time we saw another human until we got back to the river.

Our ascension began, and I quickly realized this hike would get a bit tricky at times.  Our packs were full, our jug of water was large, and our cooler wasn’t light.  We followed the little path along the river, but it soon led up to a rock ledge, with the path descending down a rock face, up another and then finally getting back along the river.  “It’s gets a bit hairy here,”informed Jeremiah.  “No problem, son” responded Jerome, “it’s not the destination, it’s the journey that matters.”  There were no words to say it better. 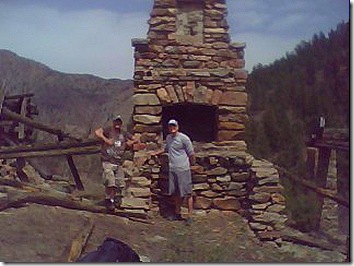 Jeremiah, with energy levels that can not be matched, said he wanted to run up a foothill really quick to make sure we were on track.  He sprinted up like a gazelle, saw exactly what he needed, and came flying down.  “I saw the old chimney, boys.  We’re almost there, it’s just a bit further,” he said without a gasp.  He was right.  A bit further up the path we came upon an old log cabin with only the chimney still standing, unharmed.  It was unreal to think of the history of the place.  Some serious manual labor went into the construction of this place, for there is no easy path in, it sits on an incline, and rests in the middle of a valley surrounded by mountains.  While standing on the base of the fireplace all I could think about was the people that had once sat around it.  I’m sure they were some very interesting people, with interesting stories.

A five minute jaunt further down the path got us to our campsite.  The circle of rocks, that Jeremiah placed there some time ago, still made the outline of the fire pit.  It was a great little spot nestled into the forest area of the mountainside.  Openings in the canopy gave us a view of the surrounding mountains, the river slowly ran beside us, and the numerous downed trees gave us a chance to do some lumberjacking as we hauled trees to the fire pit.  Observing the father-son bond also was great to see.  Jerome was out visiting from Wisconsin, and seeing both of them doing something that they really enjoyed, while being in the company of each other sure was something.  I was fortunate to have been able to experience it with them. 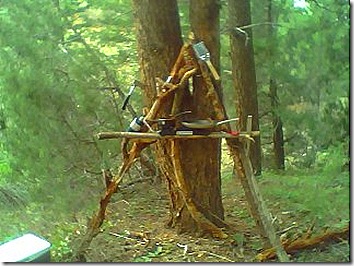 With the fire started, wood hauled, and camp set up it was time to get some food in us.  Jeremiah had set up a brilliant, makeshift cooking station with an abundance of great food that his wife, Kasey, made sure we had.  We ate like kings.

The fire had sustainable coals and night brought darkness to the sky, so we figured it was a good time to hike to the peak for a look at the land and have a thought.  We were not disappointed.  The tiny dots of light that scattered the darkened landscape that was Denver was amazing.  Red Rocks found it’s place in the foreground, and blue specs of light in the distance showed the location of the Quest building.  It was one of those moments when you just look out, gazing side to side, and not a word is spoken, you’re just locked into admiring the vastness of it all. 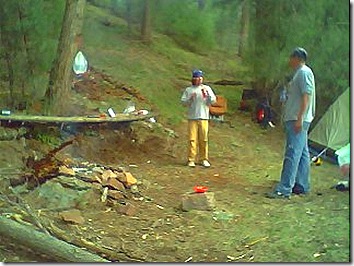 We took the road less traveled back to the campsite, which meant we weren’t actually on the right path, but the orange glow of our fire led us back.  Tranquility and calmness took hold of the night.  Bits of the fire chased each other in the wind, the slow rush of the river broke the silence of the night, and chill in the air reminded us it was the middle of April.

We watched the fire slowly lose it flame, and retired for the night.  Morning came quick, and started with a slow, cold rain.  Oatmeal and sausage patties cooked over the fire, camp was packed up, and our journey back began.  Along the path the three of us headed being careful with our footing on the slippery rocks, and taking some time to stop at some lookout points to admire the view.  Below us and far off in the distance appeared a glimpse of our cars, which became bigger and bigger as we ascended the mountain. 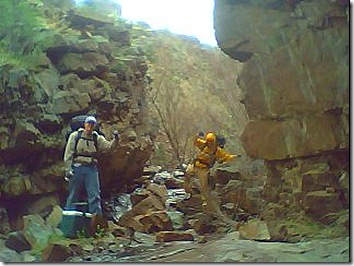 Completion of the journey was in sight, but with one obstacle in the way, the river.  Maybe it was the rain, but it seemed to me to be raging a bit faster and seemed a bit higher.  I quickly remembered the shockingly cold temperature of the water.  Jeremiah went to his spot, and Jerome and I went to ours.  I knew for sure I was up for some fashion awards as I disrobed into my boxer briefs, blaze orange stocking cap, and Jeremiah’s sandals that were three sizes too big.  I grabbed the nearest good sized stick and thought I could use that as balance aide in crossing atop the downed tree.  It began with my pack getting stuck on a branch, which caused some duress, but I got it untangled and took a few steps across with the stick.  Those few steps were the last I had on the log as I lost my footing and plunged into the mountain fed river.  Jerome’s calm words of instruction told me to push on as to not get caught under the tree.  I made it, Jerome followed behind, and a smirking Jeremiah met up with us.

We reached our destination and our journey was complete.  “This is where memories are made,” Jerome said looking back at where we were.  I couldn’t have agreed more.  One can’t beat the combination of a fierce river, raging fire, two adventure seeking Brunner’s and great conversation in the middle of the Rocky Mountains.  Memories.  Indeed.