Monterrey… Be Back Soon!

While all of the crew thoroughly enjoyed everywhere we stopped in Mexico, Monterrey proved to be a great final destination in a wonderful country. We also were blessed with some great hosts during our stay. Monterrey is located in the Mexican State of Nuevo Leon, about 3.5 hours drive from the Mexico/Texas border towns of Matamoros/Brownville, respectively. The city contains nearly 4 million people making it the 3rd largest metropolitan area in Mexico. I found the city to be modern and clean, once again showcasing the beauty and diversity of the country. Bouey, Celeste, and I even partook in a few jogs along the city’s running and bike paths next to the river bed. All along the path are soccer fields and even a large go-cart facility where we all had a little late night racing.

Our first host was the Monterroco Hostel located a short 5 minute cab ride from downtown Monterrey. The hostel is a once colonial home that offers a relaxing atmosphere, a friendly and helpful staff, and even a pool for cooling off from the dry heat of the day. During the busy season the rooms are all dorms but during the slow season some rooms are turned into doubles for couples. Thanks to the owner, Mauricio, for being a gracious host, a wealth of information, and for providing some competition at the ping pong table.

Through some connections of Shoppman’s we were able to get a little out of the city for some heart pumping adrenaline activities. Our host for a day of bungee jumping and zip lining through the canopy was the ibó Adventure Center. The Steves and I had been bungee jumping in the past, but for Celeste, Nels, and Steel it was their first time. And now I think we’ll all agree that no matter how many times you do it, bungee jumping is scary EVERY time. Our second activity for the day was a zip line tour of the canopy. This consists of attaching yourself to a taught wire at a downward angle and sliding along the wire from one platform to another, usually from one side of a canyon to another. Normally, it’s a pretty intense activity but for the crew it was a welcome cool down from the bungee experience.

The last half of our time in Monterrey was spent a short but scenic drive out of town at the beautiful Hotel Chipinque. It is located on top of a mountain overlooking the city and inside of the Chipinque Ecological Park. The view of the city from the hotel’s numerous lookout points is spectacular, especially at night. The crew stayed in a very comfortable self contained cabin, and there also are more traditional style hotel rooms. The hotel also has facilities for hosting conferences for businesses or large groups. The restaurant boasts many authentic Mexican dishes of which all were delicious and filling, something the crew really appreciates. There are many hikes and activities in the park, making Hotel Chipinque a great getaway from the close by Monterrey proper. Most of our time was spent gearing up for the border crossing and planning for Houston, meaning that we’ll be returning to take advantage of the area again soon. 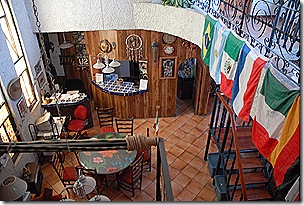 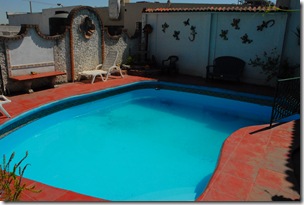 The lounge and pool at the Monterocco Hostel. 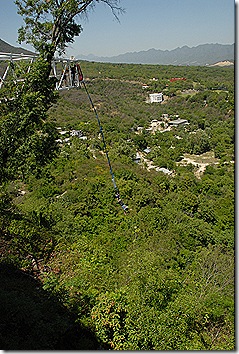 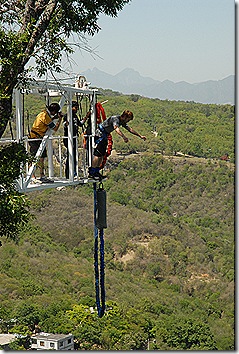 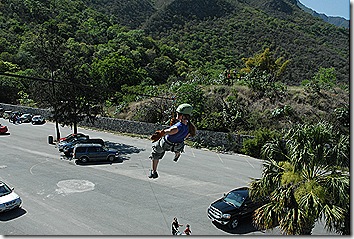 Nels and Steel do their first bungee while Celeste finishes up the day of zip lining the canopy with ibó Adventure Center. 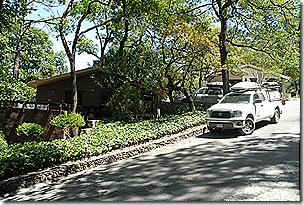 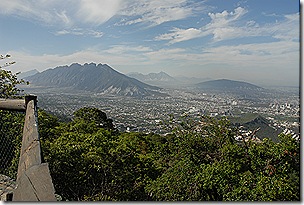 Our cabin and the view of Monterrey from Hotel Chipinque. 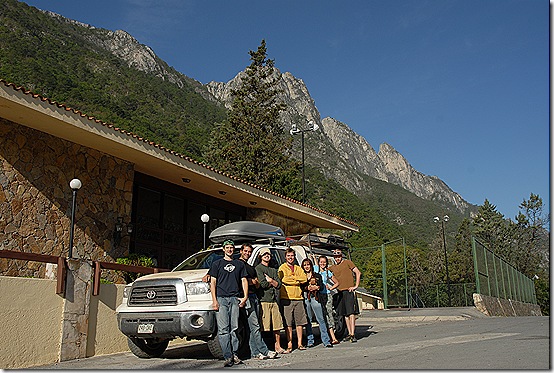 The Tundra, the crew with little swinger, and the general manager of the hotel, Monica.