We first learned about the conflict between the two countries after we entered Belize. Instead of heading directly to the picturesque Caribbean coast, we decided to spend a few days in the Belizean jungle visiting the ancient Mayan archeological site of Caracol. Caracol is a pretty amazing place on several different levels. We started to sense that there was some tension in the sleepy jungles of Western Belize when we were forced to register with the Belize military at a checkpoint halfway down the 40 mile dirt track between San Ignacio and the ruin site. We had been told by some ex-pats back in town that the military was there to protect people venturing out to the ruin site from bandits who sneak across the border from Guatemala to rob tourists and steal artifacts from the temples. It seemed like a logical explanation because only a few weeks prior to our arrival, an English couple and their Belizean guide were robbed on a remote stretch of the road.  However, after we found out that we had to travel the remaining 30 odd kilometers to Caracol in the company of a military escort, we knew that there had to be something more to the story. 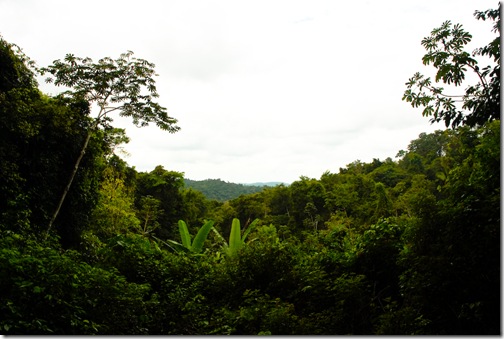 There was an eery calm over the jungle that day

While the other temple visitors in our convoy started off on their tour of the ruins, (everyone was instructed to be back at the parking lot a 2pm, at which time the military convoy returns back towards San Ignacio), we stayed behind to cook some breakfast. We had to forego eating breakfast earlier in the day in order to make it to the checkpoint in time to rendezvous with the convoy. While we were cooking up some breakfast burritos, we invited one of the military guys over for a chat. Nick was not actually in the Belize Army, but was a 16 year veteran of the Belize National Police Special Forces Unit. Nick explained that he is usually stationed in Belize City where he performs duties similar to a SWAT officer, but two to three times a year, they are sent on two week deployments into the jungles to patrol the border zone along side the Belize military. According to Nick, the Belize military does not have the power of arrest, so a representative of the National Police must accompany the military on their patrols, one police officer and six army soldiers, in case those powers need to be executed. Nick confirmed that some foreigners and their local guide had been robbed a few weeks earlier, it was actually only a mile away from the military checkpoint, but the military has been patrolling the jungle for decades and not just around local archeological sites. Obviously there was something going on behind the scenes in the jungle that straddles Belize and Guatemala, something more that just bandits preying on the odd tourist. 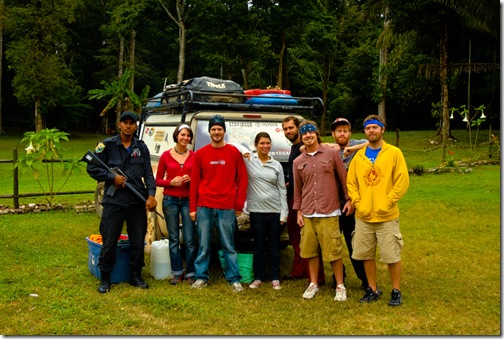 We enjoyed talking to Nick and he enjoyed our breakfast burritos

Nick went on to explain that there is a very tense relationship between Belize and Guatemala, a situation that he felt at the moment was so tense, might actually boil over into war between the two countries in the not so distant future. So what is the problem? To state is simply, Belize feels that it is an independent, internationally recognized country. Guatemala feels that Belize is actually part of its own sovereign territory.

The dispute dates back over a hundred years to when Belize was part of the British empire, known then as British Honduras. Guatemala felt that British Honduras was still part of its territory, but reluctantly agreed to a treaty with the British in 1859 to recognize the existing boundaries provided that the British crown developed roads in the area. The British never did develop those roads so in 1946, Guatemala staked claim to half the territory of British Honduras believing that the treaty signed nearly 100 years earlier had been broken. The Guatemalan’s claim was never resolved and to make matters even more complicated, in 1981 the British crown awarded British Honduras it’s independence. The new country of Belize was born, but it also inherited an increasingly bitter territorial dispute along with their newfound independence. 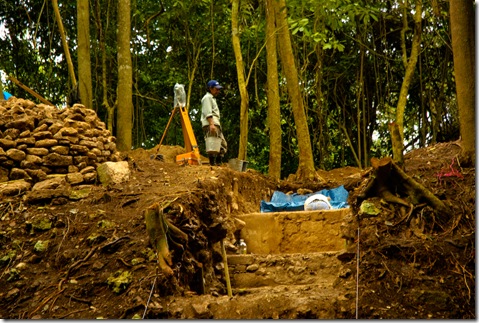 Caracol is an active archeological site 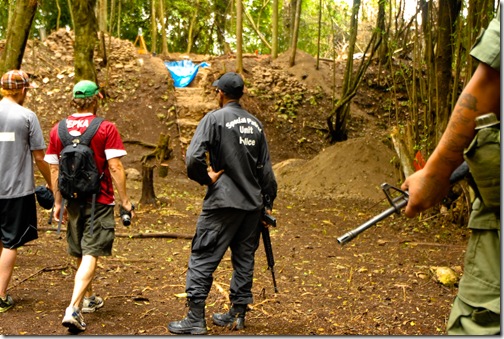 During the course of the dispute, dozens of residents of both Belize and Guatemala have been displaced, arrested and even killed. Nick was part of a patrol that at one point was surrounded by an entire village of armed Guatemalan peasants. After several tense days in the jungle, the patrol was freed but not before 300 additional Belizean troops were sent into the area with additional assistance from a British military helicopter. There is growing pressure among Guatemalan peasants in the area to take back territory they feel is rightfully Guatemalan, territory that also happens to be rich in fish, and other natural resources. The peasants threaten they will take back the land themselves if the military does not and each election cycle, Guatemalan politicians promise their constituents that the disputed territory will once again become a part of their country. At the same time, Belizeans are adamant about their right to the land and to not give Guatemala an inch of their soil. 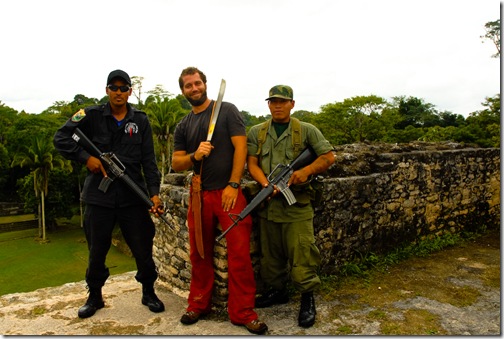 Steve ready to help out by whatever means necessary

There is an upcoming referendum in Belize that will send the issue to an international court for a final decision, but Nick believes people in Belize will reject the referendum on the basis that as an independent nation, no one has the right to tell them whether or not their land belongs to them, especially if there is a risk of that land becoming part of another country. It seems as if the border dispute between Belize and Guatemala will continue and unfortunately, with the pressure rising on the other side of the border, Nick sees the real possibility of a Guatemala military invasion. Guatemala’s military is 60,000 strong, so when you consider that the entire population of Belize is only about 300,000 people, you get the picture. “It is not going to be pretty. America will probably not help us because they have investments in Guatemala and not so much in Belize, but we think the Brits might help if it comes to that. Hopefully they will, otherwise I had better start to learn Spanish,” Nick said as we packed up breakfast and prepared to head into the ruins. Hopefully a peaceful solution to the border issue between these two countries will be reached but if history is any indicator, it will be difficult. Actually it is not just Belize and Guatemala who have problems deciding just what belongs to whom in the region. There are also ongoing territorial disputes between Nicaragua, Honduras, Cosa Rica. 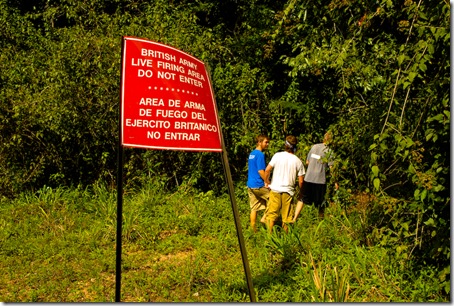 Who would have thought that the Belize jungle could be a potentially dangerous place?