Keeping It Clean and Somewhat Dangerous

Traveling around the world gives you an unparalleled view into the daily lives of people in countless cultures around the globe. In many ways, people throughout the world do a lot of the same things, but the interesting part is how they go about accomplishing those things. Take for example the simple task of taking a shower. You might think that there are not that many ways to take a shower, but you would be surprised how many different ways people go about such a simple and common daily ritual… although in a lot of places, showering may seem more of a weekly practice.

In Indonesia and throughout Southeast Asia, a shower in the budget and even mid-range accommodation in many cases consisted solely of a bucket under a spigot of cold water and a ladle. The showers were cold but it did not matter because the year round heat and humidity in this part of the world actually makes taking a cold shower a sought after and refreshing experience. The bucket/ladle shower does take a little bit of practice though so as not to knock yourself out or worse while you are blindly searching to refill the ladle from the bucket in the corner of the wet, slippery and slickly tiled bathroom because your eyes are tightly squeezed shut as a result of the shampoo that has run into them since the last ladlefull.

In Central Asia and Africa, showering gave way to bathing, usually in a river or other suitable body of water. In Central Asia, they tend to be more on the weekly shower schedule, especially during the winter. This increased shower interval is perfectly fine in Central Asia because it is so cold outside, most people stay indoors and stay clean. There is no sense in taking a shower if you are not dirty and you have not worked up a sweat working outside all day. In Africa, bathing was more of a necessity, however, it looked as if many of the popular bathing spots would actually leave you dirtier that when you started and the ones that were clean carried with them the risk of drowning in swift moving water or being eaten or trampled by the local wildlife.

Out of all the different methods of rinsing the days filth off of your body, the one that is always a shocker though is the electric shower, and believe me, it can literally be shocking. We first started seeing electric showers in the Chinese countryside, but these were efficient and relatively safe methods of producing hot water for your personal hygienic needs. Although we never really had a “hot” shower, by using these Chinese devices you could take a moderately comfortable shower nonetheless. It was not until we reached Latin America, that the electric shower not only was the preferred  method of cleaning oneself, but it had also somehow evolved into something that could potentially kill you.

Unlike the Chinese electric shower, the “point of use” style water heater in Latin America consists of a heating element contained in the showerhead itself as opposed to in a separate, enclosed unit. What makes these electric shower heads potentially dangerous is that in order for the heating element to work, you need to run an electrical current into the showerhead. This is done by running electrical wiring from the wall or ceiling directly to the showerhead itself and usually the wiring job is pretty amateur and the wires are almost always exposed. 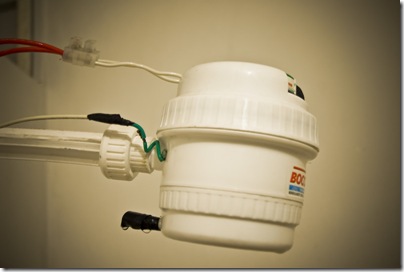 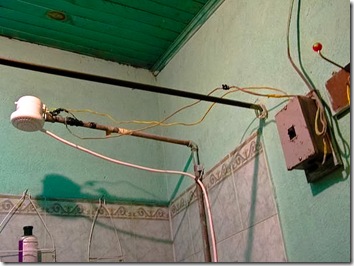 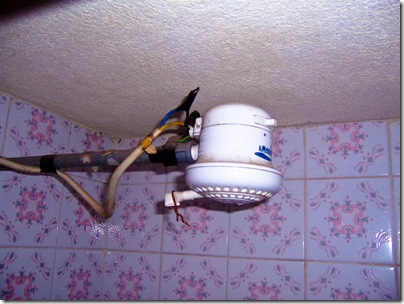 Looking just about up to code in Cusco

I like to think that most people learned from an early age in life that electricity and water do not mix, so the sight and thought of taking a Latin American style electric shower is always a bit unsettling. Unlike Central Asia in the winter, the climate here in South America is such that you will inevitably sweat a lot even if you are inside doing nothing all day, so the ritual of taking a shower falls back closer into the realm of once per day no matter what season it is. As a result, you must put your fears and your basic knowledge of science aside in order to keep clean. Apart from the wires dangling over your head serving as a constant reminder that this could be the day when that embarrassing and terrifying dream of dying naked in a gritty shower in a foreign country might become a reality, these types of showers are also generally unpleasant because even though they are electrically heated, you never actually seem to be able to take a warm shower, let alone a hot one. More water flowing through the showerhead means more water has to be heated by the element, so you are constantly adjusting the water pressure in a vain effort to find a level that produces a comfortable water temperature. However, no matter how close you come to that magic combination of water flow and electrical current, there is always something interrupting it such as a flushing toilet or someone in the next stall trying to do exactly the same thing you are. So alas, when it comes to these electric showers, it seems that you typically end up risking your life to accomplish the same exact thing that you could accomplish with a bucket and a ladle back in Cambodia. Soon enough though, we will have come full circle back to the land of the storage tank-type, instantly hot, easily regulated, safe, water heater supplied shower.