Well, I guess I can not really say never, because we did get the trucks blessed by some kind and generous monks in Thailand, so maybe you can consider the blessing of the trucks in Copacabana, Bolivia an after-the-fact kudos to the powers that be. As you may have read, the TWBR crew made it down the “carretera de la muerte,” the death road, aka the most dangerous road in the world twice in the past week. We descended the 10,000 or so vertical feet once on bikes with Pablo and Vertigo Biking and the second time on our own in the comfort and safety of the Tundra and the Sequoia… although nothing is really comfortable and safe when you are peering over the edge of a 2,000 foot cliff. Fortunately for us, we did not have any catastrophic mechanical problems and the Toyotas gripped to the road that was clinging to the cliffs along the carretera better than we could have imagined. 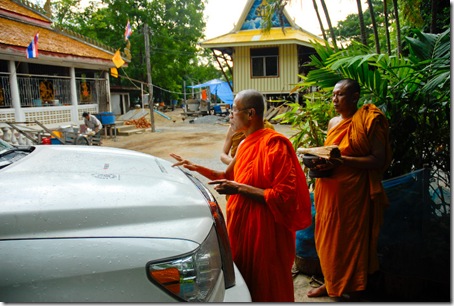 The day after making our successful descent down the death road, we found ourselves in Copacabana, Bolivia on the shores of Lake Titikaka. Coincidently, every Sunday, people from Bolivia and neighboring Peru come to the Cathedral in the center of Copacabana for the ritual blessing of vehicles by the local padre. Drivers decorate their cars, trucks and buses with ornate flowers (both real and artificial), ribbons and any other fancy or eye-catching decorations they can muster up and petition for protection from the virgin. People take the blessing ceremony very seriously and they should because the roads in Bolivia and Peru are probably some of the most dangerous we have encountered on the entire expedition. We heard about the ceremony a few days before our arrival in Copacabana and since we were in town, we decided to take full advantage of the blessings not only to protect our vehicles for the rest of the trip, but also as a show of thanks for the good fortunes we have enjoyed in the past. I think the monks in Thailand definitely helped to ensure that we did not have any expedition or life-ending encounters on the world’s most dangerous road but after making such a big withdrawal from the faith bank a few days earlier it was nice to have the opportunity to make another deposit. 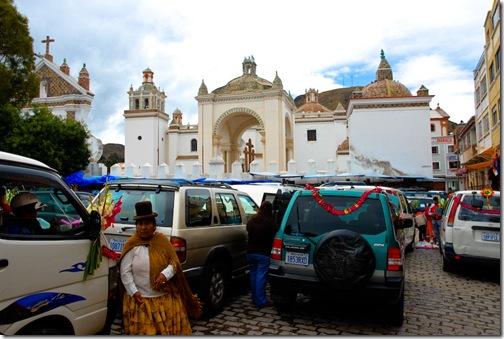 Locals line up in front of the Cathedral 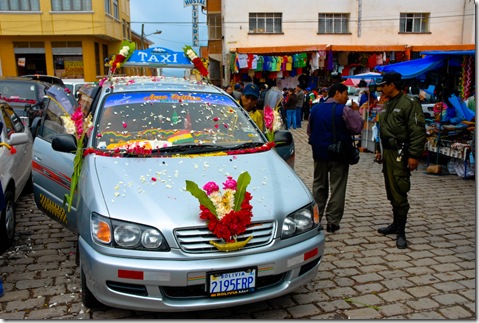 Some people go all out for the blessing 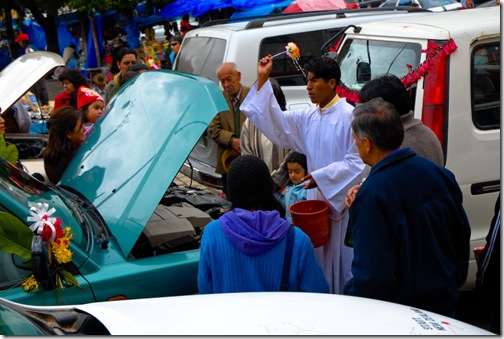 The engine is an important focal point of the blessing

As we lined the trucks up to wait for our turn, many of the locals were surprised to see some “gringos” taking part in the ceremony, but were just as equally excited that we were there to join in the festivities with them. A few locals who had already had their vehicles blessed even came over and poured some leftover alcohol on our tires to ensure our journey home would be a safe one. After purchasing some nice flower decorations for our trucks, the priest came by to not only bless the outside of the Tundra and the Sequoia, but the engines as well which we learned was an important part of the ceremony. Satisfied that we had appeased the virgin, a series of fire crackers were lit to chase away any evil spirits that still might be lingering around to give us trouble down the road. Not to be outdone by the catholic priests, local witch doctors were also on hand offering their own forms of ceremonial “auto insurance.” The ritual blessing of vehicles is quite a popular tourist attraction in Copacabana, one of Rough Guides must see things in Bolivia, and it was nice to actually take part in the ceremony as opposed to just standing by and watching. Hopefully the Toyotas are now sufficiently blessed to the point of carrying us safely all the way back to the States. I can only hope at the time of a potential road incident, there are not any conflicts of interest or arguments between the various deities we have called upon to protect us in our vehicles. 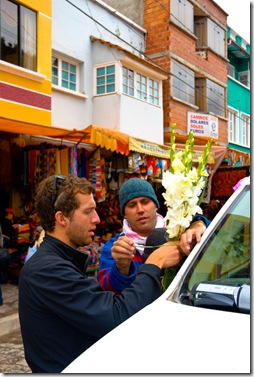 Darrell and Steve put the finishing touches on the Tundra 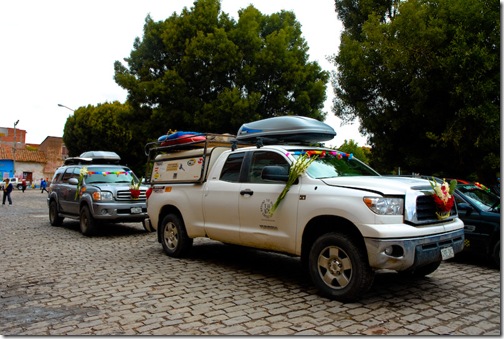 Ready to be blessed 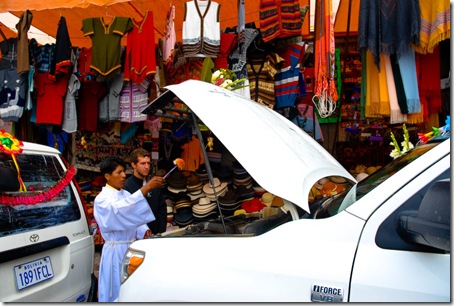 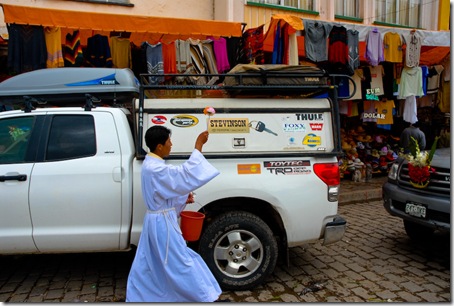 Then the rest of the Thundra 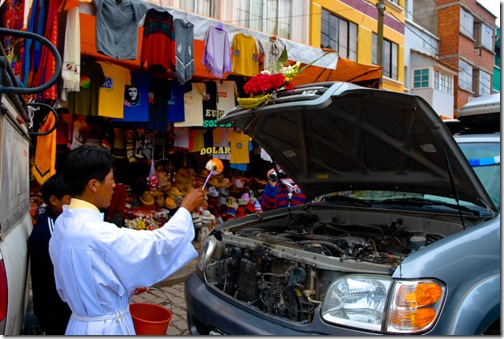 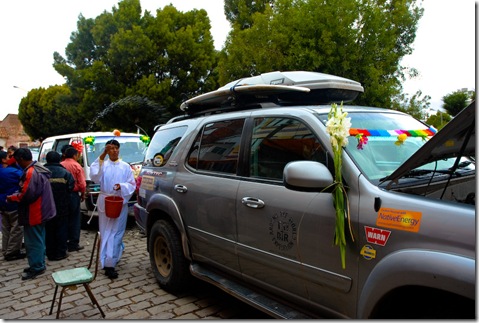 Then the rest of Little Pepe