I am sure everyone is anxiously watching the news outlets for glimmers of hope regarding the current global financial crisis. The value of people’s pensions plans are eroding, people are worried about having to work for another five years before they retire and Wall Street analysts and financial managers are wondering if they will have a job tomorrow. Actually, we here at the World by Road could not be more pleased with the current financial turmoil circling the globe.

You may be asking yourself why we are so elated about this crisis, but in every dark cloud, there is a silver lining. For us, that silver lining is shining through bright and clear. Actually, for all Americans traveling abroad right now, this little monetary meltdown is quite a blessing. You might remember a blog I wrote a few months ago highlighting the declining value of the US dollar abroad and the rising prices of oil… two conditions that have taken quite a large dent out of our TWBR bank account. Well, this financial crisis has tilted the scales in our favor. In fact, the scales are pretty much overflowing in our favor in terms of the strength of the US dollar abroad.

To show you just how this crisis has and hopefully will continue to benefit us, consider that yesterday, the price of crude oil closed at just over $66 per barrel. Compare that with an all-time high of around $147 dollars a barrel in July of 2007 and that is a substantial decrease. That decrease does take a while to be reflected in the prices of refined fuels, but it is taking hold and we are enjoying declining gasoline prices for the first time in the expedition. 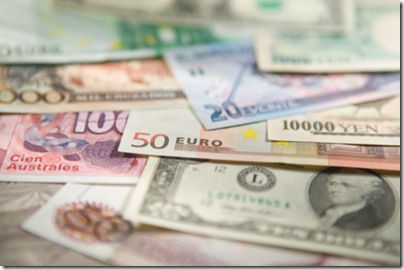 It is not just the price of fuel that is shifting in our favor. Foreign exchange rates have bounced back strongly in favor of the US dollar. Not only is the price of gas cheaper, Americans and people with money in US banks are experiencing a lot more bang for the buck in foreign countries. Here are a few examples to highlight just how strong the dollar has gotten in the last month or so. When we first entered Chile at the beginning of October, we were getting about 565 Pesos per dollar. Today, we are collecting around 648 Chilean Pesos. That is a positive swing of nearly 15 percent. Even more dramatic is the rise in value of the dollar to the South African Rand. Back when we were in South Africa in August, one dollar was worth 7.6 Rand. Today, a dollar will get you about 12 Rand, an increase in value of about 58 percent!  Other notable dollar value increases compared to when we were in these respective countries include the British Pound (18 percent), the Euro (15 percent), the Moroccan Dirham (55 percent), and the Central African Franc (23 percent). The list goes on with the exception of China, but in general the US dollar has gained anywhere from 15 to nearly 60 percent against the currencies in countries where we were buying a lot of gas and that truly is significant. I am not going to go into detail as to why the dollar is increasing in value overseas… it is actually quite simple, but in the grand scheme of things, unimportant when it comes to making my point here and that is we are enjoying higher spending power in foreign countries.

I can only hope that the trend continues. Do not get me wrong, I hate seeing people loose their money and their jobs, but since I cashed out all of my stocks and my pension plans, the tumbling Dow is not that much of a sting to me personally. In fact, it is helping me out quite a bit these days. I only wish all the crap hit the fan on Wall Street a year or so ago.

This entry was written by Steve Bouey, posted on October 24, 2008 at 11:23 am, filed under Did you know?, Trip Thoughts, World News and tagged Euro, Exchange rate, financial crisis, gas prices, oil prices, Pound, US dollar, Wall Street. Post a comment or leave a trackback: Trackback URL.