What Is Wrong With People?

Sitting here in Pointe Noire, Congo, I am starting to go a little crazy. It has been nearly two weeks since we arrived and applied for our Angola visas and we are still waiting. I have been trying to pass the time by reading and reflecting upon the Africa segment of our journey and given all that has transpired here in Africa, I have really only been able to focus on one central theme: corruption. I have become obsessed with corruption. I find myself constantly trying to find out more about the varying levels of corruption in the different countries we have passed through and trying to make sense of our daily encounters with corruption here in Pointe Noire. Each of my conversations with members of the ex-pat community here in the Congo always wind their way back to corruption, and when we are able to get online in between the random yet still somehow consistent power outages here in town, I am looking for more information as to the prevalence of corruption and what if anything can be done to put and end to it… especially here in Africa. I am obsessed to the point at which I can say that in 2007, the Republic of the Congo ranked in the top 10 percent of countries in the world in terms of corruption. (If you want to see where everyone else falls on the Perceived Corruption Index, check out Transparency International’s Annual Report) 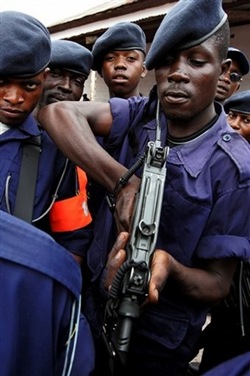 Personally, I believe the problem of corruption in Africa is immense. It ranges from our daily encounters with overzealous and underpaid police officers trying to extort money from us for ludicrous and falsified infractions to the top levels of government… politicians who have padded their own personal offshore bank accounts at the expense of the development of their country and the progress of their citizens. The numbers are staggering. According to a 2006 World Bank report, it estimates that half of all funds donated to health efforts in sub-Saharan Africa… billions of dollars… never reach the clinics or hospitals, instead leaking out in the form of payments to ghost employees and payments for padded customs, transportation and warehousing prices. It seems like you can not build a single road, bridge or building without some public official benefiting. During his 10 year rule in Zambia, president Frederick Chiluba stashed away nearly $46 million of public money in his offshore bank account but that pails in comparison to the estimated $5 billion Charles Taylor had in offshore accounts while he ran Liberia into the ground, or the estimated billions that Zimbabwe president Robert Mugabe has reportedly stashed away in Switzerland while his country teeters on the verge of total economic collapse.

Africa has a lot of problems. Humanitarian problems, economic problems, social problems. The list goes on and on. I am by no means an expert on Africa and I have hardly been here long enough to formulate any reasonable opinions on the cause for all of the misery here on the continent and I am certainly in no place at this stage to recommend any solutions. But I am observant and I do have a background in politics and public policy and that, coupled with my recent obsession with everyone and everything corrupt, has led me to become more and more convinced that all of Africa’s problems stem from two things: a systematic lack of transparency in government operations and a lack of the rule of law. Without transparency and respect for the rule of law, Africa and it citizens will continue to suffer. Sure, most of the problem can be blamed on the endless list of African dictators who have used government institutions for personal gain, but I think the people too can be blamed for not reining in the excess of these plundering politicians. “People power” can be an effective and successful tool against government largess, but it seems to be stagnant and ineffective here in Africa. It is almost like people do not care that their leaders are driving their country into the ground and taking them with it.

The African continent represents one of the poorest regions in the world, yet in terms of natural energy and resource wealth, it is one of the richest. Oil and gas has the potential to provide much needed revenues and has allowed countries throughout the world to address the problems that they face, yet in in Africa, the revenues from energy production represent a curse: corruption runs rampant, waste is chronic and the gap that has developed between the extremely rich and the desperately poor is essentially insurmountable. It is painful to see how much potential Africa has for development yet in reality, how that potential has been squandered, wasted and tucked away into the pockets of the connected elite.

So what can be done? Is Africa destined to become one of history’s monumental failures? Are the people of Africa doomed to be forever victimized by tyrannical despots destined to profit at the expense of their citizens? It is without a doubt a monumental problem requiring a multitude of complex solutions and one that will take years, if not generations to correct, but I guess I can take some comfort in knowing that people are trying to right the ship. The United States has recently developed the Millennium Challenge Account (MCA) which provides funding to developing countries on the condition that they meet strict criteria for good governance; the responsible management of government affairs, services and finances, and other lending organizations such as the World Bank are implementing similar criteria for the disbursement of their loans. Unfortunately, many developing countries in Africa with newly discovered mineral and oil reserves such as Angola and the Democratic Republic of the Congo (DRC) are turning to other investors, namely China, who delivers billions in development funding in return for access to natural resources but without conditions of good governance, human rights, or economic reform. To the Chinese, “business is business.”

So providing development funding on the condition that the money is used appropriately alone will not work. Pressure has to come from elsewhere, namely from the citizens of these countries and countries throughout the world demanding greater transparency in the public sector and demanding that they become party to the billions of dollars being extracted from onshore and offshore reserves. Given what I have seen here in Africa, if I had to deal with the same problems day in and day out that people do here, I would probably be right along side people in picking up guns and fighting, but violence is not the answer and will only continue to push these countries closer to the point of no return. Something needs to be done to force leaders of countries in Africa to be accountable for their actions and to be accountable to their constituents. One thing is certain, there needs to be a fundamental change in attitude not just in people and nations wishing to help, but in people here in Africa, because the situation seems to only be getting worse… (case in point; Zimbabwe, Sudan, and Somalia) and programs like the MCA are only Band-Aid approaches to stemming the blood flow from a hemorrhaging wound.