We have been waiting for word on our Angolan visas now for nearly two weeks. That fact that this past Thursday, May 1st was May Day, or International Workers Day did not help our situation in the least bit. May Day is celebrated throughout the world, except in the United States where we honor workers with the Labor Day holiday in the fall. Depending on where you are, May Day shuts down the country from anywhere from a day, to over a week, as was the case when we were waiting for our paperwork in China.

Here in the Congo, the May Day festivities officially only last one day, however, because May Day fell on a Thursday this year, it effectively meant that everyone had a four day weekend, including the consular staff working on our visas. The two “official” days off from work, plus the reduction in productivity leading up to those off days means that we are relegated to waiting even longer for our visas. The current word at the consulate is “sometime this week,” although they are still reluctant to give us any exact days or timeframe estimates. Unfortunately, I am still reluctant to get too excited about this news, because they said the same thing last week.

Luckily one of our new friends from South Africa, Charles, is a budding professional angler and has all of his equipment here in the Congo with him along with some extra gear to spare. Since everyone who is in any capacity to help us get the hell out of the Congo has been out of the office for the past four or five days, we thought we might as well go fishing. Why not? Everyone else has. Unfortunately, our motivation to get up at 5 in the morning was not enough to impress the fish as we did not catch much of anything, but it was a chance to get in the car and go for a drive… something this trip is all about and something we have not really done in quite a while. 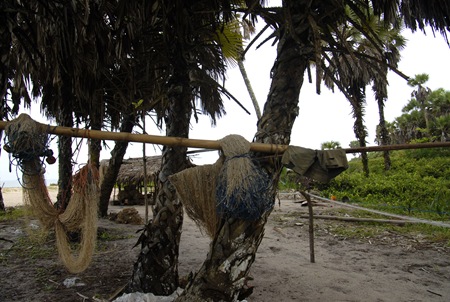 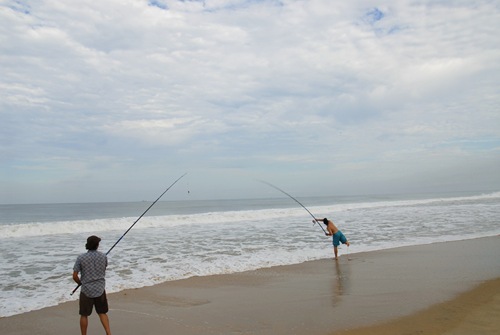 Mark and Charles try and catch some breakfast 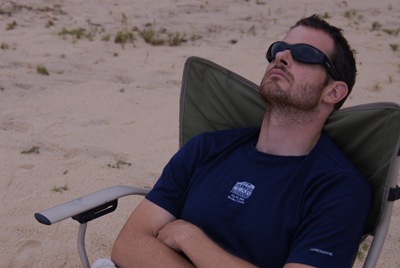 Still not feeling fully recovered from malaria, I caught some Z’s

This entry was written by Steve Bouey, posted on May 5, 2008 at 8:15 am, filed under Action Sports, Congo, For some laughs, Trip Thoughts and tagged Angola, Congo, fishing, holidays, May Day, Pointe Noire, visas. Post a comment or leave a trackback: Trackback URL.