The TWBR team now consists of 5… Steve and I, Caki, Elena and Jimmy Swift, who has been riding dirty with us since Sydney. El Chapitan and Kira have gone off on their own and we wish them safe travels. Currently we are hanging out in and around Darwin in the Northern Territory getting some work done, cleaning out the trucks and getting ready to move on into South East Asia. It is nice and hot up north but also very tropical so after a week in the outback, it is a relief to be somewhat free of the red dust that has attached itself to everything we own although it has been replaced with sticky sweat. The outback was very interesting and is filled with a mixture of amazement and wonder but also has it’s fair share of awkwardness and straight-up weirdness. 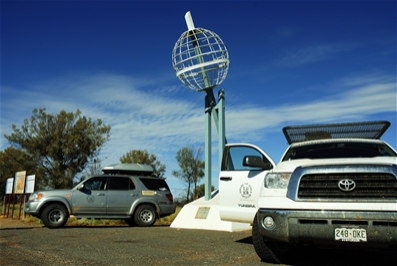 There is not much out there in the outback, hence the name I imagine… only a handful of small towns and cattle stations to pass through on the Stuart Highway. We covered the 1,500 km from Alice Springs up to Darwin with not much to see, although we did pull over and snap some shots as we crossed over the Tropic of Capricorn. Our stay in Australia is coming to an end and it is hard to believe that later this week we will be parting ways once again with the trucks, although hopefully for a much shorter period of time.  Next move for us-getting on a plane bound for Indonesia.

In other exciting news, Panasonic has finally decided to release the codecs that we have been waiting for and need to start editing all of the HD video we have been shooting thus far. This is exciting news as we were losing our patience and even began the process of reformatting hardrives on our laptop in order to install a new operating system which would have involved a lot of time and energy. We hope to sort through the hours of footage we have and within a short period of time, should have some great stuff up on the website. We are also filming a new promo/introduction piece here that should also be up soon given our recent technological development. Panasonic told us March… it is almost May, but I guess late is better than never.

This entry was written by Steve Bouey, posted on May 1, 2007 at 7:43 am, filed under Australia, Expedition Updates. Post a comment or leave a trackback: Trackback URL.