Trek To The San Blas Islands

4:45 a.m. rolled around and it was time to get up.  The great people at Luna’s Castle Hostel, in the Casco Viejo neighborhood of Panama City, set us up with a jeep ride to Carti to meet the rest of The World By Road crew for the first time in the San Blas Islands.

Steel Jones and I had absolutely no clue what we were in for.  A jeep promptly picked us up outside the hostel at 5am.  The vehicle was painted in mud, the off road tires meant business, and the driver’s knee-high rubber boots translated into some possible tough terrain.

The rugged El Llano-Carti highway essentially has two parts.  The first being your relativity chill drive through the outskirts of the city, past many car repair shops, and palm trees.  The second, however, I viewed as a ride at an amusement park.  The switch-back, up and down madness that ensued was pure craziness.  This part of the road is a gravel, small rock, mud and clay combination that makes an interesting foundation for such a trek.   Our driver, however, brilliantly maneuvered through what seemed like an off-road race course.  If it wasn’t for our four-wheel drive we would be amongst the other vehicles that were still lying upside down off the cliffs below.  Our driver made sure to point out the tracks of those that weren’t so lucky, and I think it gave him a boost of confidence that he wasn’t one of them.  I, at that time, was in no mood to question any of his motives, and looked over the edge in awe. 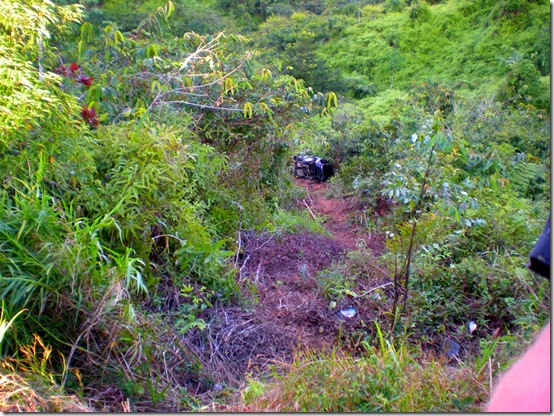 Slow moving clouds made their way around the low chain of forested mountains to make for some pretty awesome scenery.  The clouds, however, turned to rain, and rain on this off-road course is definitely not a positive.  Dirt turns to thick mud, and clay gets even more funky, but we pressed on.

All of the sudden the driver took a wide turn and popped it into reverse. We were careening down a mud spackled hill in reverse towards a river that was too deep to cross in a truck. Interesting, I thought, but by this time nothing surprised me.  The tires were slowly sinking as we backed down the clay filled earth.  I looked behind to see a murky river with two homemade boats, resembling canoes along the bank, manned by the local indigenous peopled called the Kuna.  Since it had rained, the jeep was unable to cross the river and there were boats for our voyage to Carti.  The trip down the river had dense jungle forest on each side, with sun shining down through the tree canopies and old abandoned villages spotting the banks.  Up ahead was another Kuna boat with two men feverishly bailing out water. I looked back to see if our captain was going to stop to help. We stopped, not for assistance, but to board that boat.  I smirked, grabbed a plastic bailing tool, and did my part.

This journey was to take us to a Kuna village in the Gulf of San Blas. The Kuna merchant boat took us to the Caribbean Ocean making its way to a tiny Kuna island village. The boat pulled along a makeshift pier, we unloaded our gear, and were led through a tiny passage way between simple thatched-roofed huts to a picnic table on the other side of the island. It took about a minute and a half. Our guide welcomed us to the Kuna Island, told us that he was happy we came to stay with them, that lunch was to be served shortly, and since their accommodation was full we were to be going to Diablo Island (Devil Island) to stay with his grandfather, Jimmy. He then said we were free to explore. The crowded huts lined each side of the four foot path around the small island. There was no electricity, dirt floors, and no plumbing. 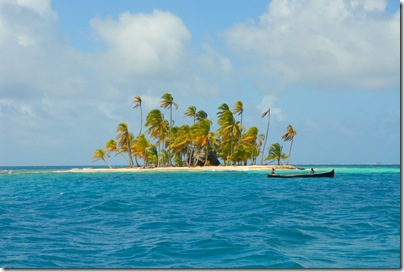 The men were all smiles, gracious hosts, and dressed in traditional Western attire.  One guy wore board shorts, a Nike cut-off shirt, and a Yamaha trucker hat.  The women, however, wore traditional, bright colored garments.  A gold ring was pierced through tip of their noses, and many beautiful beaded bracelets wrapped around their arms and legs.   The children were alive with energy and some of the most athletic kids I’ve seen.  They were break-dancing on the dirt paths with Steel and diving down to unbelievable depths to find coins the older children were throwing into the water.

A pasta meal, salad, and fresh vegetables were served before we headed back to the boat to encounter the waters again to get to Diablo Island.  Our hour boat jaunt through the Gulf of San Blas got us to our destination.  There were three thatched roof huts, and palm trees.  Nothing more, nothing less.  If paradise was a place it would be here.  White sand beaches circled the outer twenty feet of the small island.   Islands you only see in cartoons stood alone off in the distant. 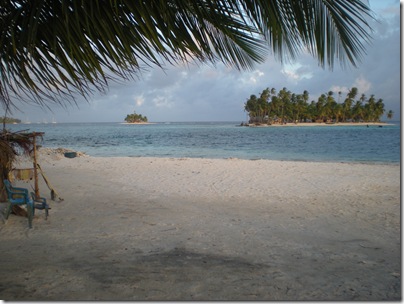 In an attempt to clean up the island, that takes fifteen minutes to walk around, Jimmy had made piles of dead palm branches, so he was more than pleased that we stacked a bunch of them together for a massive bonfire to be blazed later that evening.  Jimmy cooked us some rice and fresh fish for dinner before we set the pile on fire.

The sun set beyond the Caribbean horizon, and the palm leaves burned quickly.  No artificial light seemed to make way for millions of stars that scattered the night’s sky.  One couldn’t ask for a better end to a crazy adventure of a day, and we were luckily only one island away from where the rest of the crew would be the next day.  An unreal twenty-four hour period, not too bad, for a total of twenty dollars.