“Okay, mas rapido por favor,” Melissa said jokingly to the group.  The guide turned and said, “Do you have somewhere you need to be this afternoon?” At this point we were already 5 levels deep in a Bolivian mine at 13,500 ft.

The day before Bouey, Melissa and I were touring around Potosi and decided to pop into a tour agency.  Normally we steer clear of organized tours, but in this case the mines were something we did not want to miss.  Ultimately, this “tour” is far from organized, resembling more of a rigorous journey around a working mine with a former miner and local girl. Since this mine dates back to colonial times, it is full of history.  Potosi, at its peak, was one of the richest cities in the world.  The minerals in the mine in the 17th century put this Colonial outpost on the map and also took the lives of millions of slaves.  Today it still takes the lives of countless other Bolivian miners and even some children.  Cerro Rico is the name of the historic mountain that is home to this mine, and many of the tunnels of the mine go as deep as 17 levels where temperatures reach as much as 40 degrees Celsius. While many of the colonial parts of the mine are somewhat well built with arching supports to reinforce the tunnels of the mine, the majority of the rest of the mine has been created more recently using primitive tools and sticks of dynamite…and not a single tunnel has more than a few loosely placed branches, boards or railroad ties for support. 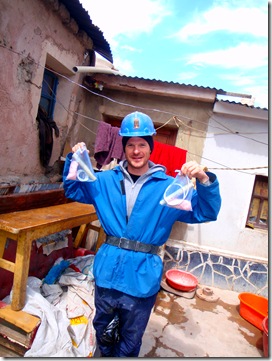 Around nine in the morning we were suiting up for the day.  Hard hats, overcoats, overpants, headlamps and galoshes were the standard mine tourist’s attire for the level 5 mine tour.  Apparently, if you make it down to level 17 it is so hot that standard outfitting consists of little more than a pair of underpants.  As soon as we got all of the proper gear, our next step was to purchase gifts for the miners. Since the mine is still a fully working mine, it is courtesy to give the miners either a stick of dynamite (complete with fuse, ammonium nitrate, and detonator) or option 2, what we like to call the miner’s party pack. In the miners party pack is a small bottle of 96% pure potable alcohol, a few handfuls of cocoa leaves, a cocoa leave activator stone, and 100% pure tobacco unfiltered cigarettes.

This pure alcohol is sold all over the streets in Potosi, the miners drink it straight, while eating lunch one day Melissa and I saw a man at a restaurant using it to clean the silverware, but most importantly, while in the mine, we learned that it is an offering to Tio the satanic figure that the miners pray to for help finding valuable minerals.  All of this is purchased in the miners market where there are crates of dynamite sitting on the street at store fronts lining a few blocks of the city. 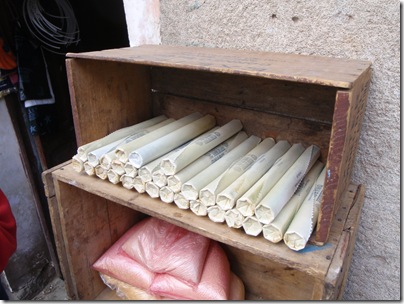 Our first stop when entering the mine was the “museum” where we had our first glimpse of Tio,  basically a typical statue of Satan with a giant penis.  It took us about an hour to reach the museum Tio calls home, climbing up and down the tunnels and passageways in the mine, all while having bags of dynamite and miner’s party packs strapped to our belts. 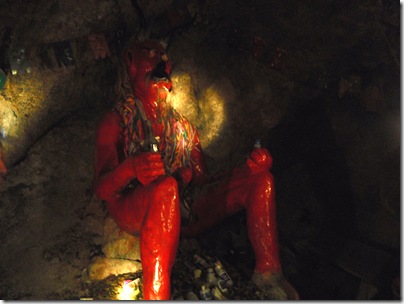 At first it was all fun and games, passing a few bottomless pits without any sort of railings or safety barriers and seeing a few of the collapsed tunnels.  The first level was a piece of cake…that did not last long.

“Oh sorry, oh no, watch out,” yelled one of our fellow mine tourists, sending the whole team into alert mode at the first decent into a tunnel when he caused a partial collapse, nearly hitting his girlfriend and our guide in the head.  Since our guide had explained earlier that the dynamite detonators can explode by simply getting too hot, it was safe to say that a large rock falling on the bag would probably have a similar effect, effectively making the tension increase from that point on. Once in the museum, we went through the ceremony that the miners do when praying to Tio.

Led by our former miner turned guide, who was chewing cocoa leaves like a rabbit on amphetamines, we took the cocoa leaves, pure alcohol, and cigarettes in a ritualistic fashion and put them all over Tio’s body as a gift. Why pure alcohol? The miners believe that if they give Tio anything less than pure alcohol or pure tobacco, he would in turn give them nothing but impure minerals at the end of a hard working day. And why worship the devil in a mostly Catholic civilization? The slaves realized early on that they could just go deep into the mine and do nothing while their overseers were on the top not knowing any better.  Instead of working hard for 15 or 18 hours each day, they were working maybe 4.  The king noticed that the mine’s production was dropping so he introduced to the uneducated slaves to Tio, a frightening version of Satan who was the god of the mine.  Then the king got lucky, miners started to die from Silica poisoning and they were sure that it was Tio punishing them for their substandard work.

After about an hour of worshiping the devil we moved on from the museum with the original Tio statue and made our way deeper and deeper into the mine. We passed some more collapsed sections of the mine, one of which was a former blast site where a miners helmet remained on top of the rocks that covered his body, blood covered the walls.  The guide informed us that a miner recently died in a blast gone wrong there. The group was silent for quite a while after that.  We struggled through sections of the mine with only crawling space, while walking freely in other parts with giant caverns passing many more Tio statues. One cavern in particular we stopped and the guide informed us, “You see how it looks like Swiss cheese with all of the holes and tunnels above?”  Of course we did, we had been seeing this Swiss cheese for the last couple of hours in the mine. She went on to saying, “It is predicted that the mine will collapse in the next five years from too many unsupported tunnels.”

Great, I am now five levels deep in a mine about to collapse with bags of dynamite strapped to me and my friends, with a devil worshiping former miner, and a dim headlamp. 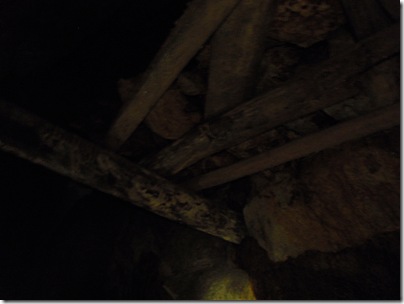 Moments later I was getting out the video camera to film us coming down a particularly difficult section of a tunnel when Bouey laughs with Darrell and says, “Look up.” Above us was a good 100 tons of loose rocks held in place by a few measly rail road ties and tree branches.  Although I laughed too, it was more of an uncomfortable laugh while my heart began to race and my head told me that mining time was over.  I filmed Bouey and Darrell making their way through this tunnel, we then ran into some miners where we took some photos and gave them the party packs and dynamite.

It is certainly a real feeling when you are crossing paths with guys that spend all day down there, right next to the Swiss cheese and loosely supported tons of rock waiting to fall on their heads.  For us, down there it was not about the history, but current current conditions.  It was not like visiting an old mine that has been made safe where the tour guide tells you about how conditions used to be.  This mine IS working, and there are children and miners that work there day after day, in a place that all of us were ready to leave in a few hours full of fear.  These men and children work here sometimes 18 hours per day, and it is said that once someone starts working in the mine, they have an average of 10 years left of life. 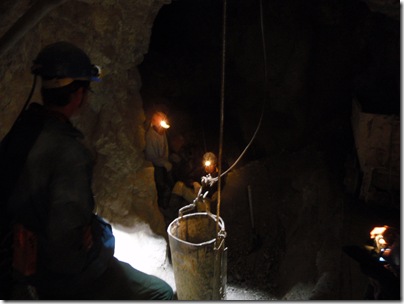 When we climbed out of the exit tunnel breathing the fresh air thankful to be out. This was a very different in your face perspective of the reality that severe injustices exist in the world. The uneducated citizens and slaves that have lost their lives in the mines are a reminder that education is a privilege, not a right. Thanksgiving just passed and Christmas is right around the corner, and for any of you that have the ability to read this message with access to the Internet, be extra thankful. Be thankful for this right that you have been given knowing that you cannot be tricked into breaking your back for some king because of a scary looking statue. While these miners have been dealt a bad hand in life, they were very kind people willing to show us their way of life for little more in return than a few supplies to help them do their job. I respect them for that.