“The key to everything is patience. You get the chicken by hatching the egg, not by smashing it.”

“Patience is the ability to idle your motor when you feel like stripping your gears.”

The list of quotes related to patience is just about as long as the situations in life you will undoubtedly encounter that require it. Problems are inevitable in life and having the patience to deal with problems as they arise will undoubtedly make your life easier. I knew that there would be a lot of situations that would require a lot of patience on this expedition, and I like to think that over the course of the last two years, I have become a much more patient individual. Just about every day on the expedition, something will come up that requires some degree of patience. Whether it is trying to communicate with someone in a foreign language about the simplest of things, or waiting for political issues in the country you are in at the time to run their course, having the ability to be patient can get you through a frustrating situation without doing any physical or emotional harm to yourself or anyone around you. 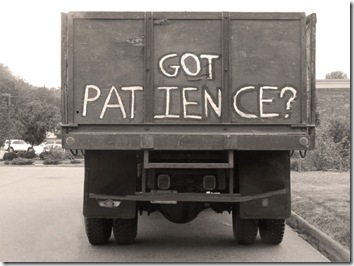 We have been here in Santiago, Chile for a little over a week now making some repairs to the vehicles and everything has been going perfectly. We met some great guys in Santiago who really know their way around a vehicle, they have the technical know how to fix problems that have been lingering for months and they are doing all of this out of the kindness of their hearts. Everything was going so smoothly that I was almost expecting something to break the rhythm and necessitate me to tap into my patience reserves, so when we were informed that most public servants, including customs officials has gone on strike in Chile on Tuesday, it was not that much of a shock to me. The problem with public servants going on strike, and more specifically, the customs agents, is that the day before the strike, a replacement part for the suspension in the Sequoia arrived in Santiago. We had been waiting for this part for nearly a week and now that there was a strike going on, it did not matter that it had arrived at the airport because there was no one there to clear the package through customs. I am now once again finding myself in the position of verbally repeating some quotes about patience in my head.

“Patience and fortitude conquer all things.”

“Patience is bitter, but its fruit is sweet.”

Hopefully, and according to Vauvenarques, “patience is the art of hoping,” these striking public servants and customs agents will negotiate an end to the dispute and reach some agreement with the government regarding the 14.5 percent pay increase they are demanding. According to the local papers, the strike is only supposed to last two days, but we are in Latin America and things here have a strange tendency to drag on longer than you expect. In the meantime, all we can do is be patient and hope for a quick resolution to the problem and spend our time working on other things. After all, one of the secrets of patience is doing something else in the meanwhile.

This entry was written by Steve Bouey, posted on November 13, 2008 at 2:28 am, filed under Challenge of the Week, Chile, Trip Thoughts, World News and tagged chile, Labor Strike, Pateince, quotes, Santiago. Post a comment or leave a trackback: Trackback URL.