It was the best of times, it was the most random of times…

This is to transcribe, as best as memory serves, the events that took place between Friday October 24, 2008 and Monday October 27, 2008 aboard the NaviMag local.  What occurred on Monday could not have been what any of the 90 passengers had in mind upon boarding on Friday-that is unless anyone was expecting to disembark 12 hours early via tugboat, 500 yards from the port while sporting damp life jackets under their backpacks.  What exactly went wrong, no one can ever really know for sure.  What we do know is that on the night of Friday October 24, those 90 passengers, albeit mostly eager coeds, boarded the NaviMag excited to spend the following 3 nights and 4 solid days gawking the beauty of the southern Chilean fjords. 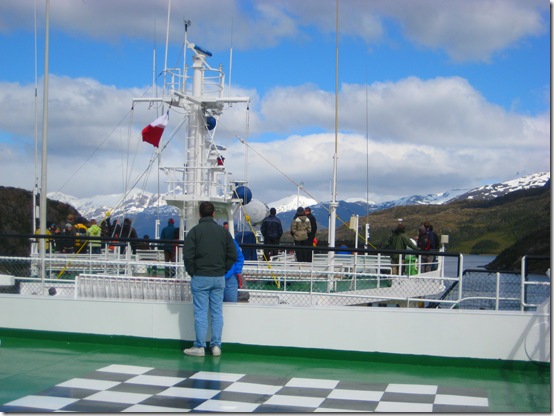 Navimag is a vessel like no other on the seven seas.  Imagine the spirit of a fine luxury cruise liner that consistently goes above and beyond the utmost standard in modern nautical engineering.  Hopefully an image similar to the Queen Elizabeth 2 immediately springs to mind.  Got it?  Now, take this grand image and replace it with the exact opposite.  I guess what I meant  by “going above and beyond” is to just simply get used to the ever-present smell of sewage gasses hovering near the cafeteria.  And oops, did I say “fine luxury cruise liner?”  I meant to say “cattle and cargo ferry” with scheduling promptness rivaling an African government office in purgatory.  Above all else I believe one can conclude that NaviMag’s first mistake is the blatant disregard of tide tables, followed by disregard of time itself. 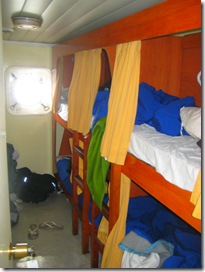 The gang was actually set to depart on Thursday, arriving on Monday but found out that the NaviMag, in an attempt to recover 3 weeks of lost time, changed it to Friday-Tuesday…hey, no problem, we understand.  Friday’s timetable went from leaving at 6pm, to 9pm, to 2am to 4am to finally leaving Saturday morning after breakfast was served at 10:30.  Again, no problem, although I guess it is a little bit of a shame having to spend one of our guaranteed 3 nights still in Puerto Natatles….oh well…they did still reluctantly give us and the trucks half off on passage in exchange for promoting them on the site.  An hour after departure, we were exactly where the brochures promised: calmly cruising through narrow straights of snow capped mountains cascading into the inky water below.  For the rest of the day it was clear that choosing the NaviMag was the absolute right way to go since the ongoing scenery could only be seen from these particular decks.  Day progressed into night as one drink turned into many celebrating Laura’s 25th birthday.  By the next morning the ship had completed it’s careful navigation of the fjords and was on to open water.  It’s just as well that the dramatic scenery was on pause for the next 24 hours since open water, for all intents and purposes, often equals heaving seasickness.  I imagine that, although tasty, the meatloaf and strawberry juice for lunch that day wasn’t the best ‘last meal’.  Sorry, Laura.

By Monday morning word had spread that the last night on NaviMag always concludes with bingo and a disco.  A disco? Bingo?!?  If you need me I’ll be in my cabin getting ready!  Not so fast, you…they’ve just called for morning announcements in the lounge (probably just to make the nights events official).  Instead, it went something like this:

NaviMag Lady: blah blah blah…we left late, arriving a day early…blah blah. Scheduling problem. But since disembarking will begin at 8, dinner will be at 6:30!  You can all go check out the bars in Puerto Montt for a night instead of being cramped on the ship!! Does that sound like something everyone might be interested in?

Collective 90 passengers: Whoa? What??! blah blah blah….Where the $%@# are we going to sleep tonight?  What are you gonna do about this, lady? We all paid for 3 nights 4 days, meals included!…blah blah blah….WHAT ABOUT THE BINGO?!?!….seriously, how is NaviMag going to resolve this and compensate us accordingly?…blah blah blah…

This went on for roughly 30 minutes while the Navimag employee was repeatedly getting pelted with verbal eggs and rocks.  However, she did a pretty good job riling up the crowd by offering zero answers to the mounting questions.  The only thing that was clear was that everyone needed to be off the boat by 8, so they could board the next round of passengers waiting in Puerto Montt.  “Uh, oh.” At this point some of us retired to the top deck out of harms way incase the frothing mob were to storm the bridge.  An hour later a petition appeared reading something along the lines of “We will not get off unless compensation is received”.  Dang, people are serious…we signed it, but just for the sheer thrill of it! Another meeting after lunch re-fanned the flames until it was agreed that NaviMag foot the bill for hotel rooms suitable to match respective cabin fares paid.  “Alright! Now time to relax until our early dinner!”

Around 8pm, we were approaching Puerto Montt, the hotel beaconing on the shore. “Oh, just look at it! It’s beautiful. Whoa! What the…?  Are we setting anchor?  But we’re still 500 yards from the port. Seriously? Now what?”  One look at the waterline reaching the shore told us that we were about 6 hours too early.  It was around this point that we were told that TWBR, having already received a 50% discount, would not have hotel rooms waiting.  “Aw, what the #$#@?”  Some brief reminding NaviMag that our deal was still contingent upon receiving the same standards as all other passengers, not to mention that we are the ones that documented the entire debacle and will be telling the story to our audience. “Yes!”  But wait, there’s still that whole ordeal about still being 500 yards from land.  “Wait…What’s that? A tug boat?”  Within the hour everyone was suited in damp life vests loosely fastened, carefully taking the emergency steps one at a time down to the tug boat laughing at the randomness of it all and wondering how it ended up this way

The trucks were not recovered until around 2am while everyone enjoyed the plush lounge with new friends that now seemed like family after such weekend.  So for all the new friends we made with some incredible views and pleasant crew, we thank you NaviMag! You can keep your scheduling  conflicts, life vests, and nauseating smells. 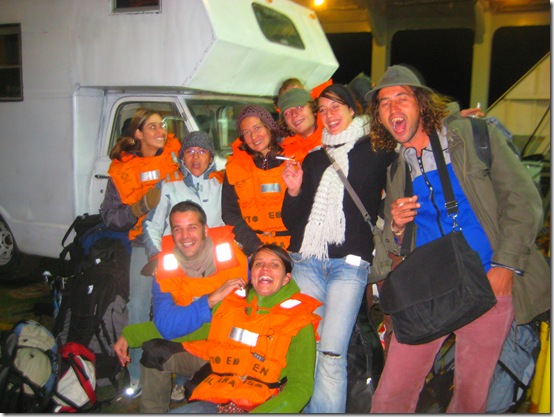 This entry was written by Melissa Terry, posted on November 11, 2008 at 11:58 am, filed under Chile, For some laughs, South America and tagged chile, Chilean fjords, ferry, Navimag, patagonia. Post a comment or leave a trackback: Trackback URL.