A Rodeo is a Rodeo

The world is full of differences and we have been very privileged to witness a tremendous amount of diversity throughout the course of the expedition. Differences abound at all levels of society and culture and learning about why people, cultures and countries do things differently and more importantly, appreciating that certain things are in fact done differently is an invaluable education. However, from time to time, you also learn that many things are quite similar and familiar to what you know and recognize from home, wherever that may be. Observing these similarities is also highly educational and over the course of time, you also begin to realize that in general, people throughout the world might not be as different as you think they are.

Recently, we were fortunate enough to be in El Chalten, Argentina for the 23rd anniversary of the founding of the town. It was still the off-season in El Chalten in terms of tourism but the town was buzzing with preparations for the celebration. The festivities on tap for the anniversary party included a live concert, a gaucho parade and a huge community wide asado (BBQ), all leading up to the marquee event – bronco busting. In other words, they were going to have a rodeo.

North America has a pretty strong cowboy culture and nothing really symbolizes that culture and celebrates it quite like a rodeo. Two of the biggest rodeos in the world are held in North America in Denver, Colorado and Calgary, Canada, respectively. Cowboy culture is prevalent in Mexico and it just so happens that it also plays a big role in the cultures of a handful of South American countries as well, especially Argentina. All of the expedition members were pretty excited at the opportunity of attending a South American rodeo… almost as excited as we were to pig out at another Argentinean asado. 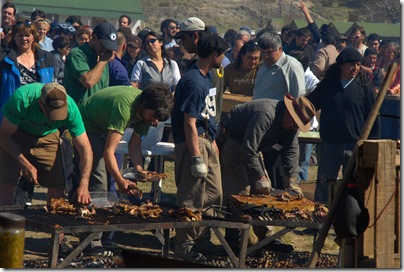 The rodeo was quite a show and the local gauchos from El Chalten and the surrounding area put on an amazing show as they each took their turn trying to ride on the back of a wild bronco for as long as they could. As I watched the rodeo in El Chalten, I could not help but think that it was pretty similar in structure and style to the rodeos I had been to back home. One of the most important parts of a rodeo in the US or Canada is the master of ceremonies. These individuals walk you through the entire rodeo, introduce the various events and competitors and give you a bit of background on the ferocity of the animal a cowboy or cowgirl is about to risk their life trying to ride all while doing so with a sense of humor that keeps the crowd involved and entertained. The rodeo in El Chalten was no different as the MC kept the crowd laughing with the delivery of one bad joke after another in between the thrilling rides taking place in the center of the arena. 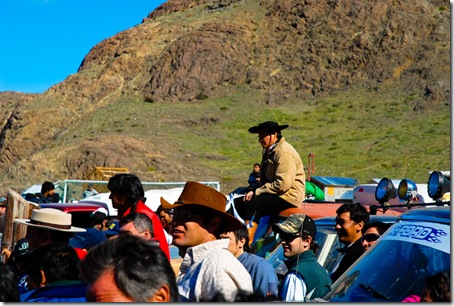 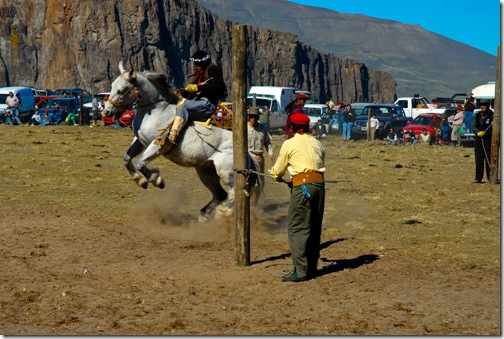 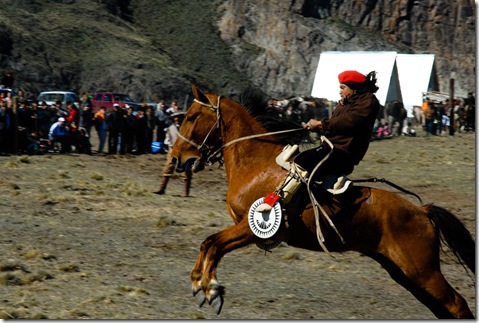 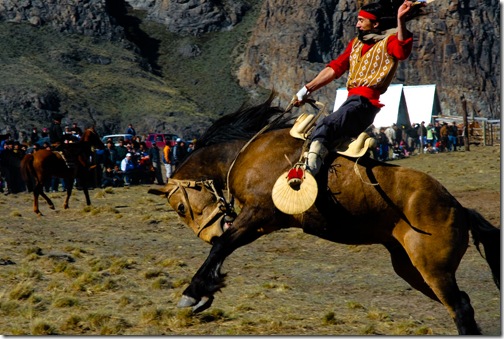 There were several other similarities between the rodeo in El Chalten and ones that you might typically find in North America. The crowd mostly consisted of families each with small children dressed up like cowboys, live country music was playing (although the country music in El Chalten is much better than anything you might hear from Garth Brooks or George Strait in my opinion), animals were on display for you to feed and in some cases ride, merchants and craftsmen were selling their rodeo and cowboy related merchandise and the cowboys themselves were all taking a beating for our entertainment. The drifting smell of hay and animal feed accented with barbequed meat and vegetables in the air, the itch of dust in your eyes, the clanging of cowbells and the whistling, laughter and applause from the crowd was all very familiar. The only real difference I noticed about the rodeo in El Chalten was the spectacular backdrop of snow capped, Patagonian mountains surrounding the outdoor arena. Aside from the scenery and of course the fact that everyone was speaking Spanish, it did not matter how far I was from the Denver Coliseum and the National Western Stockshow, a rodeo is a rodeo and everyone was having a good time. 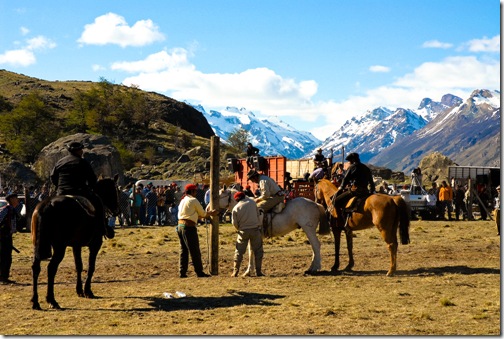 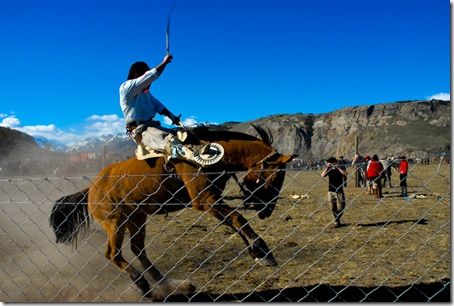