I would bet that most of you have heard this saying before, and depending how old you are and where you grew up, you probably remember the Wendy’s commercials featuring the little old lady that solidified the phrase’s place in American and international pop culture. The commercials that aired in the US and Canada in the mid to late 80’s featured Clara Peller going into several restaurants with her friends, and ordering hamburgers only to find that there was not much beef to be found in the burger. Well, unlike the late Ms. Peller, I have definitely found the beef and it is all over the place here in Argentina.

We have met a handful of Argentineans in our worldly travels and in talking about their homeland, if there was one common denominator in the descriptions they gave us of Argentina, it was that Argentina has the “best beef in the world.” In fact, they were so confident not only in the quality of the beef emanating from ranches throughout Argentina, that some even took it a step further by saying that Argentina has the best meat in the world. Coming from the United States, where we pride ourselves on the delectability of our own homegrown beef, I was really interested and excited to see just what these people were talking about. After spending a few weeks here in Argentina, I can personally say that these people were not joking around about the quality of meat in Argentina, and we have not even made it south to the heart of the country’s agricultural, farming and ranching region. In Buenos Aires, meat is everywhere and if you are a vegetarian, you will have a difficult task ahead of you trying to find a restaurant that will cater to needs which most Argentineans would probably consider to be quite strange. 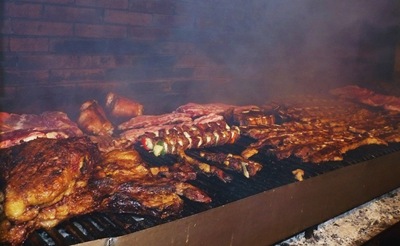 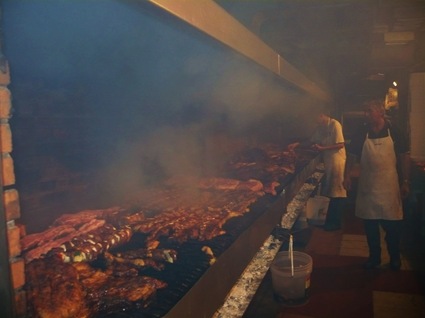 …a whole bunch of it 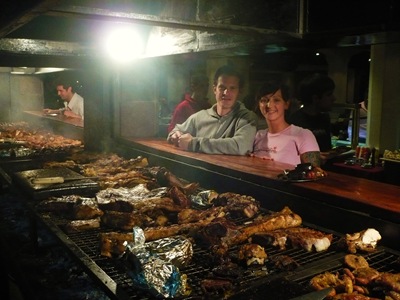 I have had the privilege of eating some of the best steaks and meat dishes in my life here in Buenos Aires and to make matters even more appealing, you can dine on a great cut of meat in Argentina for a fraction of the cost of what you would in back home in the US. In fact in some restaurants, vegetable dishes are more expensive than the staple meat plates. And you do not have to go to a restaurant to participate in the meat madness of Argentina. No matter where you go, no matter what time, it always seems like someone is grilling up some meat. Whether it is a collection of street stalls grilling up meat before a home football (soccer) game, the drifting odor of grilling meat descending from a residential window in downtown Buenos Aires, the smoke filled air in open spaces and parks on a sunny weekend day, to a full blown Gaucho barbeque out on the ranch, you are always within olfactory’s reach of some great food. Luis and Ignacio were right, Argentina arguably has the best beef, if not meat in general, in the world and no matter what part of the country you are in, you can bet that beef is what’s for dinner. 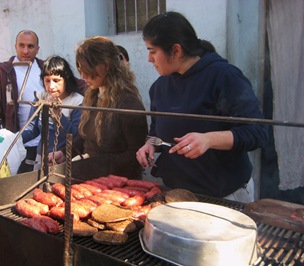 Argentineans doing what they do best

Having access to good quality meat is one thing but unless you know how to cook it, you might as well be a vegetarian. Fortunately, Argentineans also know their way around a barbeque. In the US, knowing one’s way around a barbeque is a well respected talent. Granted, cooking something on an open fire is a pretty simple means of preparing a meal and not that far removed from methods employed by our cave dwelling ancestors, but there is a learning curve and not everyone has the capability of making magic happen on the grill. Eating all of this great meat in Argentina has inspired me to create The World by Road International BBQ Awards. For this important competition, I have taken the time to go back and reminisce about all of the food we have devoured on this trip, food that was cooked on a barbeque of type or another, and rate quality of the barbeque on a scientifically proven yet unreleased scale resulting the following awards. Granted, we did have some great barbeque in countries that did not make the podium but in order to medal in this competition, it takes more than a few individual grill masters scattered about the country… it takes a nationwide mentality that embraces not just the art of grilling but the culture that comes with sweating over a smokey bed of coals, sometimes for hours, in order to deliver some goodness that can only come from a barbeque. So, in honor of Ms. Peller and barbeque fans around the world, here are the final results of the TWBR International Barbeque Awards.

Argentina has a grilling mentality and a supply of top shelf meat to back up everything we have heard. So, the next time someone from Argentina tells you about the quality of their meat, they are not kidding.

There are some regions in the US where the barbeque is second to none: St. Louis, Kansas City, Texas and whether it is a tailgate party at the local stadium, or a 4th of July picnic, good barbeque it not too hard to find. The only reason the US fell short of the gold is because there are too many vegetarians per capita compared with our competition winner Argentina.

In Afrikaans, they have their own word for barbecue, braii, and they do it up right. Not only will you find beef on the grill in South Africa, locals seem to throw whatever they can over the coals: wharthog, giraffe, gazelle, antelope, crocodile, ostrich, the list goes on.

Malaysia – Just because Wan hooked it up so nice

Australia – Kangaroo on the barbie is pretty damn good, but a lack of variety, flavor and the inability to pronounce “fillet” right will continue to keep Australia out of title contention no matter how many people hover over the grill down under.