I know, I know, everyone is aware that shipping the trucks overseas is a royal pain in the ass, but it is time to vent once again. I am not really going to hold anything against Mediterranean Shipping Company, even though they have pushed back the estimated arrival of the ship on three separate occasions for a grand total of five days. I assume their delay is due to weather, and hopefully it is, because when a ship is delayed five days over the course of a 10 day sailing, I can not think of anything else except for some serious mechanical problems. I guess I have no choice but to accept whatever excuse they throw our way. It is totally out of my hands, so I really do not have a choice in the matter. At least they are telling me that the ship is still scheduled to arrive and that nothing catastrophic has happened to either the ship or to my beloved Toyotas.

When the weather turns bad, so can your shipment 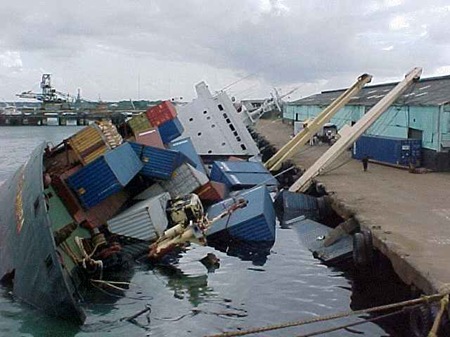 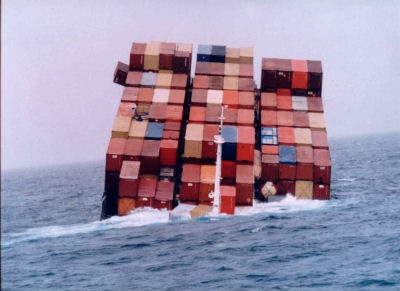 Aside from the fear of something horrible happening to our shipment, we are also having to deal with some major headaches here in Argentina. Unfortunately, we did not complete our research on shipping to South America in time to realize that shipping to Buenos Aires, Argentina vs. Montevideo, Uruguay probably ended up costing us several hundred, if not several thousand dollars more and the two ports are only within a days drive of each other. We are finding out that the process is not only expensive here in Argentina (one explanation was because importers shoulder the cost of dredging the port in Buenos Aires), but complicated… especially for us.

Both the Tundra and the Sequoia are titled to our company, S and S Global Ventures. The company consists of a grand total of two people… Steve and myself, hence the S and S. We have documents from the Colorado Secretary of State indicating that we are the principle owners and and partners in the company and that the company actually exists and is registered in Colorado. Apparently these documents are not good enough for the Argentineans. We are slowly finding out that they are notary crazy here in Argentina and as a result, everything has to be notarized in some way here, even if it has already been notarized in another country. So, on top of the fact that we have an original Bill of Lading with our names on it indicating that we are shipping the trucks to ourselves, the original titles for the trucks, the original Carnets for the trucks, the original registration for the trucks, notarized documents that we are in fact the S and S behind S and S Global Ventures, the customs officials here in Buenos Aires want us to provide them with a notarized contract from S and S Global Ventures giving Steve and I permission to drive the trucks in Argentina and a signed letter from the US Embassy stating that S and S global Ventures is an actual company. Oh yeah, and they want to charge us about $2,000 to unload and clear the container. Talk about a headache. They are loco in the cabeza I tell you.

The more experience we have with overseas shipping, the more we hate it. Without a doubt, the question of how we get our trucks across the ocean is one that we get the most. Unfortunately, we know the answer to the how, but have yet to figure out the answer to the best. For now, we quantify and qualify our shipping experiences not by what goes right, but by how many things go wrong. No matter what continent you are on or what country you are shipping your cargo into or out of, one thing is a guarantee… something will go wrong. Ultimately, I guess a successful shipping experience can best be described as one where the ship does not sink.

This entry was written by Steve Bouey, posted on August 25, 2008 at 11:43 am, filed under Argentina, Shipping, South America, Trip Thoughts. Post a comment or leave a trackback: Trackback URL.