I am sure you have probably all been wondering what the hell has been going on with the expedition. Well, the quick and dirty answer is twofold: a lot and not much. In the last five and a half weeks we have managed to drive a grand total of about 360 kilometers. We were stuck in Pointe Noire, Congo for exactly four weeks until we decided that we needed to pull the plug on the Angolan visa process there and try our luck elsewhere.

We have been in contact with a Dutch couple that we met in Nigeria who have been following a similar route and although they experienced problems of their own in Cameroon and Gabon, made it through Brazzaville, Congo and Matadi, D.R.C., where they got five day Angola transit visas issued to them in 24 hours. Based upon that information, we packed up the trucks and headed towards Brazzaville because we were also informed that we would be denied entry into the D.R.C. without a letter from the Angolan Embassy in Brazzaville stating that it was possible to get a visa in Matadi. For the D.R.C., no proof of onward travel, no entry, plain and simple.

Sounds easy enough right? Drive 360 kilometers to Brazzaville, get a letter from the Angolan Embassy the same day, drive to Matadi the next, get a transit visa for Angola a day later and within a week or so, we would be sitting pretty in southern Africa with the problem areas comfortably in our rearview mirror. However, in the infinite wisdom of Lord Buddha, when it comes to the future, “whatever you think it will be, it will always be something different.” This line of thinking could not possibly be more applicable that here in Africa.

The road from Point Noire to Brazzaville takes the cake as being the worst road we have driven on during the expedition. In fact, I would feel comfortable betting that it is the worst road in the world. We got the trucks stuck on multiple occasions in mud that was waist deep. We were forced to drive on small deviations that took us up hills at what seemed like 45 degree angles, and at one point, we had to actually build a bridge with the help of some local villagers using bent railroad rails and rotted logs to get the trucks over a narrow, but very deep culvert. 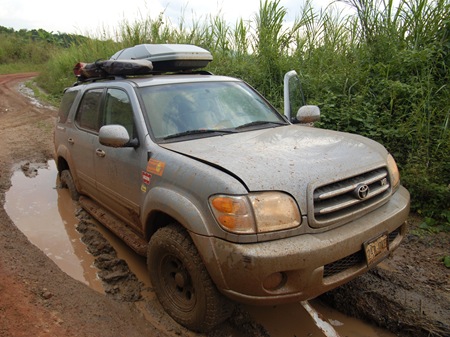 Stuck in the mud again 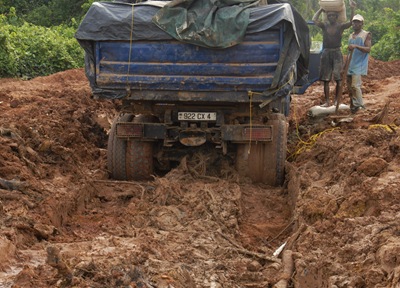 As if the road were not exciting enough… it took us the better part of three days to drive the 360 kilometers from Pointe Noire to Brazzaville, we had to contend with the rebels. There is a region of the Congo just west of Brazzaville known as the Pool Region. The Pool Region is home to the remnants of the rebel army that had been fighting the Congolese government during the bloody civil war here in the 1990’s. After a peace treaty was signed in 1997, the rebels were out of a job and although the rebels, locally known as the Ninjas, received some political concessions, the unequal distribution of wealth in the Congo they were fighting a decade ago still remains largely in tact today. With no money, the rebels have little other choice but to get what they can from people crazy enough to venture down route N1.

It was not long before we had our first rebel encounter, but we were prepared… at least as prepared as you can be for a rebel encounter in the middle of the Congolese jungle, and made it through the makeshift checkpoint for the price of a few packs of cigarettes and some vitamins that had been floating around the Tundra. The Ninjas were actually pretty cool, telling us that with no jobs, they are forced to “tax” people on the road. If the Ninjas go to the bigger towns to look for work, they are arrested and thrown in jail. When we told the Ninjas that we sympathized with their situation and that we were American tourists, they insisted on taking photos with us. The whole situation was a little nerve wracking, especially since most of the rebels were either drunk, stoned, or both. Additionally, many of the Ninjas were armed with AK-47’s which they demonstrated were very much operational. Shattered nerves and gray hairs aside, we got some pretty sweet shots with the rebels… it is not everyday that you can whip out a photo you took with some genuine Congo rebels. 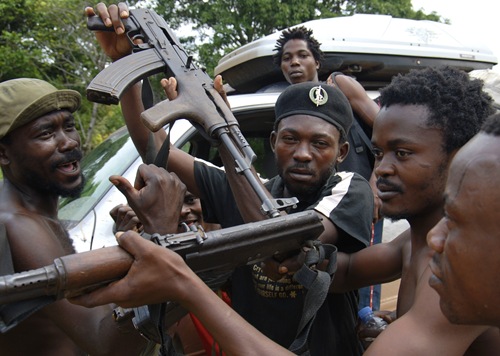 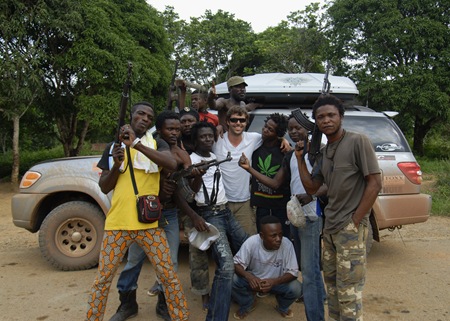 Mark and the Ninjas

We encountered several more Ninja roadblocks along the road to Brazzaville, mostly at huge mud pits where vehicles had become stuck. The Ninjas would happily help dig you out of the mud for a large fee and they had it set up as such that no matter which way you drove, you were going to get stuck. Lucky for us, we had two trucks, snatch straps and our own shovels, so when we did get stuck, we did all the work. Because they could not ethically “tax” us for work they did not do, they let us pass in exchange for a few small “gifts,” e.i. cigarettes, broken sunglasses, and bananas. We had hoped to make it out of rebel territory in one day, but the condition of the roads ensured that was not going to happen. As it turns out, we ended up spending a night at a rebel camp with the district rebel chief, Mr. Tompette. Mr. Tompette was very hospitable, and let us park our trucks near his compound so we would be safe for the night. We even watched old DVD’s of the 10th anniversary of the peace treaty with our rebel host as other Ninjas gathered around, grumbling when they caught a glimpse of the president on the screen. The next day, after playing around with some guns and taking a few photos, Mr. Tompette provided us with a Ninja escort all the way to Brazzaville, completely free of charge. 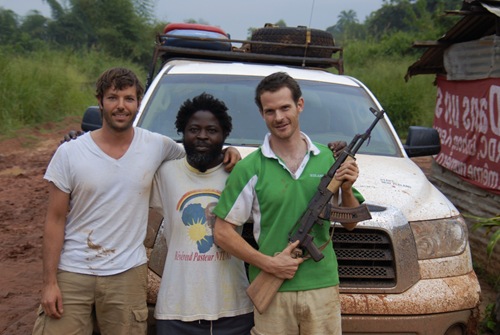 Today on Mr. Tompette’s Neighborhood, the Americans drop in…

It was a lot harder than we thought, but here we are in Brazzaville, Congo, which according to Aneki.com, is the city with the worst standard of living in the world. The people are actually pretty friendly here, and although there are signs of development and progress in Brazzaville, visible remnants of the civil war still exist; buildings pockmarked with bullet holes, security checkpoints, a strong military presence, etc. We were originally planning on being out of Brazzaville in a day or two after getting the letter we needed from the Angolan Embassy, but as luck would have it, the Consul, the only individual in an entire three story building with the ability and authority to sign our letter, is on vacation for a week and we arrived just as he was packing his suitcase. I should get Lord Buddha’s view on the future tattooed on my eyelids. That way, I will not be surprised when the simplest of tasks becomes a monumental undertaking. As a result, we once again find ourselves playing the waiting game while trying to ignore growing feelings of dÃ©jÃ  vu. It is reported that the Consul will return from his holiday on Tuesday… we can only hope.

This entry was written by Steve Bouey, posted on May 26, 2008 at 9:45 am, filed under Africa, Challenge of the Week, Congo, Expedition Updates, Road Conditions, The Toyotas and tagged Africa, Angola, bureaucracy, Congo, consulate, Ninjas, Pointe Noir, Rebels, visas. Post a comment or leave a trackback: Trackback URL.