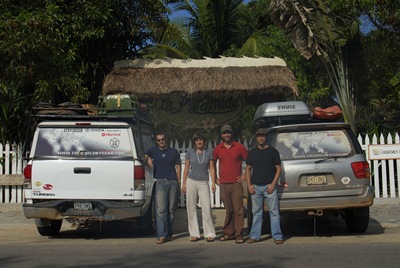 TWBR crew in from of La Pyramide, Pointe Noire, Congo

It has been over three weeks now since we arrived in Pointe Noire, and it seems like we are no closer to getting our Angolan visas than when we first applied for them. “Come back tomorrow,” “Come back Wednesday…” I do not think they understand that I no longer want to come back. If I had my way, I would forget Angola even existed. Unfortunately, reality interferes with my fantasies of jumping off bridges with bungee cords and going to rugby matches in South Africa, Angola clearly out of sight in the rearview mirror of the Tundra. Reality forces me to acknowledge Angola’s existence and come to terms with the fact that we have no choice but to drive through it.

We tried to see if it was feasible to skip Angola, we really did. We investigated shipping the trucks, a drastic step considering how painful the shipping process has been in the past for us, but we have reached the point where we are willing to endure that pain to progress the expedition. In true keeping with our past experiences, the shipping companies informed us that for hefty fees they will be more than happy to transport our trucks around Angola in the amazingly quick time frame of 50 days. No one was ready subject themselves to that type of pain just yet. 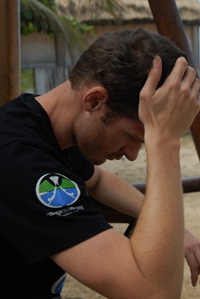 Thinking of ways around Angola

We investigated driving back around to Brazzaville, through the “pool area” where rebel groups known as “Ninjas” lurk in the jungle waiting for vehicles to pass, collecting valuables from motorists with the aid of rusting, yet still fully functioning Kalashnikov assault riffles. The funny thing is, in considering this option, the Ninjas are not our biggest concern. We have instead been focusing on the reports of overlanders being turned away at the D.R.C. border for not having onward Angola visas, (even though they are reportedly issued at the border town of Matadi) Having already paid large sums of money to take the ferry across the Congo River to Kinshasa, with the end result of being denied entry, coupled with an expired Congolese visa and a mounting pile of “paperwork problems,” aka financial problems, this option could backfire and leave us in a much worse position than the one we are in now. We do have some Dutch friends whom we met in Nigeria that are in the process of making the Brazzaville-Kinshasa-Matadi run this week and based on what we hear back from them, will decide if we will follow suit. 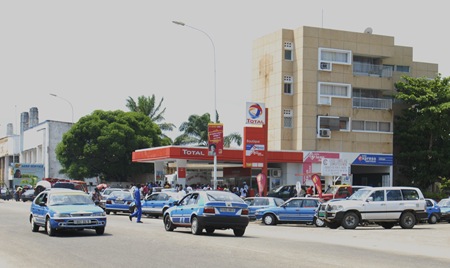 Little did we know, another problem was looming on the horizon

However, even if we wanted to pack up shop and make a run for it, there is no fuel in Pointe Noire and both trucks are nearly on empty. That’s right, they ran out of petrol a few days ago, gasoil (diesel) is expected to run dry in the near future and according to our friends at the Toyota dealership, the supplies will not be replenished for another few weeks. The situation is so bad, that they do not have any more Jet-A aviation fuel at the Pointe Noire airport, so all airport operations have been temporarily suspended as well. Apparently, the supplier has had some refining issues that have resulted in production shortages. All this is very ironic considering how many times we have watched the sun set over the Atlantic at La Pyramide over the last three weeks and subsequently watched as the flaming, burn-off of gas from oil rigs a few miles offshore slowly lit up the darkening sky. Signs of petroleum production are everywhere here in Pointe Noire. In fact, on some days you can even smell it, yet for some reason, there is no fuel. 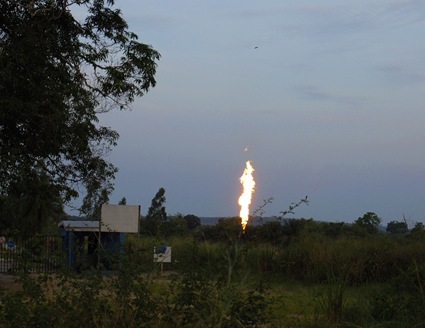 Oil is coming out of the ground here in PN, but it goes somewhere else

To top this all off, I have somehow managed to contract malaria again, only days after starting to feel better from the last bout and Shoppman finally lost his odds battle with the local mosquitoes as well. Twilight Zone I tell you, Twilight Zone.

This entry was written by Steve Bouey, posted on May 12, 2008 at 8:40 am, filed under Congo, Expedition Updates, Trip Thoughts and tagged Angola, Congo, gas shortage, malaria, Pointe Noire, visas. Post a comment or leave a trackback: Trackback URL.