Oh The Places We Have Been

I was going through some old pictures on my hard drive, sorting things out to try and make my computer run faster and it reminded me just exactly where we have been on this trip. Unfortunately, I think my computer problems are related not to the amount of space photos are taking up on my hard drive, but the amount of moisture that has accumulated in it as a result of the nearly unbearable humidity here in tropical West Africa.

It does not seem that long ago when we pulled off the Stuart Highway in Australia to snap some photos as we passed by the Tropic of Capricorn on our way north to Darwin. Since then, we have passed by the equator (although we did it on a plane and the trucks did it on a boat in route to Singapore), the Tropic of Cancer (although there was no sign in China to actually prove it, so the photo was not that interesting),the Arctic Circle, back past the Tropic of Cancer (this time there was no sign in the middle of the Sahara Desert so no real photo opp there either) and down into the Southern Hemisphere once again here in Gabon (this time pulling over for a few minutes to take a photo… although the risk of getting clipped by a logging truck in the process was fairly significant). 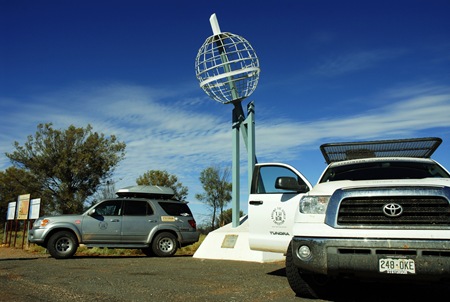 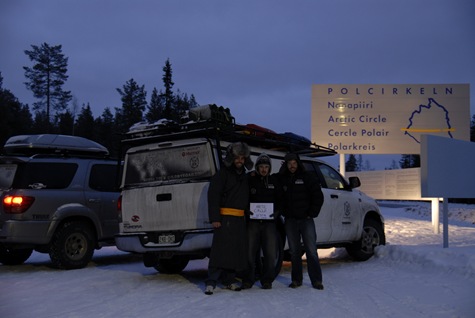 Several months later, we would find ourselves a lot farther north 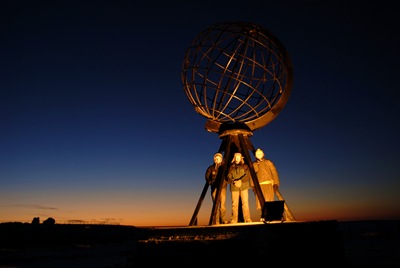 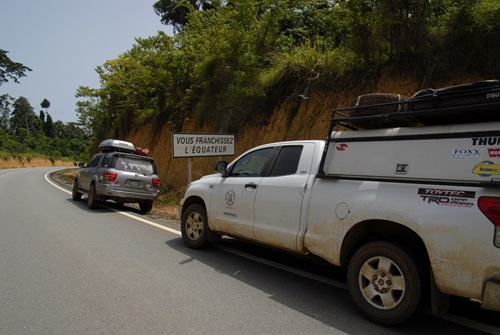 Now we are back in the Southern Hemisphere, this time on terra firma

We still have a long way to go and will pass by several more geographically significant coordinates, but looking back, we have logged a lot of miles and ticked off quite a few degrees of latitude and longitude. Actually, about 120 degrees and 275 degrees respectively of latitude and longitude to be exact… nearly three quarters of the way around the world equatorially and about a third of the way around the world north to south. The aim is to make it a full 360 in both directions, the far reaches of the Arctic and Antarctica aside on the north south route, so we have not done too bad for a government auditor, and graphic designer and more recently, a stone mason.

This entry was written by Steve Bouey, posted on April 15, 2008 at 7:37 am, filed under Gabon, Trip Thoughts and tagged arctic Circle, Australia, Equator, Gabon, Norway, Tropic of Capricorn. Post a comment or leave a trackback: Trackback URL.