Going Through A Rough Patch

We have not posted anything in a few days, but honestly, we have had a lot of other things on our minds. We are, without a doubt, at one of the most difficult points in the expedition here in the Congo. After securing relatively difficult to obtain visas for both the Republic of the Congo and The Democratic Republic of the Congo (D.R.C.) in Libreville, we left Gabon and it was not long before we encountered what we had been told would be a long stretch of bad roads.

Actually, the roads heading from Libreville south to the border were not that bad but once we crossed through the bamboo gate signifying the Congo frontier, they took a pretty significant turn for the worse. In fact, the after reaching the first major town, Dolisie, we were informed by some people that our proposed route south through the remainder of the Congo and the D.R.C. would not be possible because the roads have been washed out by rains. Technically, it is the beginning of the dry season here, but the damage had already been done and the lingering rains ensured that nothing has really been done, or will be done, anytime soon to fix the damages. 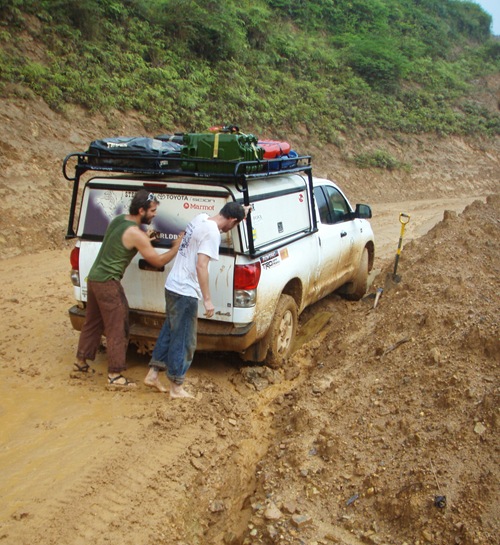 We knew we were going to encounter some problems with the roads and we also knew were could potentially encounter some problems with bandits in rebels. So far, we have been lucky with no unfortunate encounters here in the Congo, but again, we were warned about our onward route. We were convinced to deviate from our original route and head west, back to the coast and try and slip through the Angolan enclave of Cabinda before heading down into the DRC and then on into Angola. Well, as it turns out, rebel activity in and around Cabinda has flared up in the last month and so to have clashes between rebels and government forces around the D.R.C./Angola border near Matadi, where we were planning on crossing. So now we are trying to figure out just how to get our trucks, and ourselves, south. We have some great new friends from South Africa who have been going out of their way to help us in our situation here in the Congo and things are looking as well as they can I guess.

Oh yeah, I am also finding out first hand how bad it sucks to have malaria. Yes, on top of the bad roads and the threat from rebel groups and bandits operating in the area I have to do it with a combination of blistering fevers, core shaking chills and body aches that I have never felt before. The most striking part about all of this is that we still have it a lot easier than the majority of the people here. 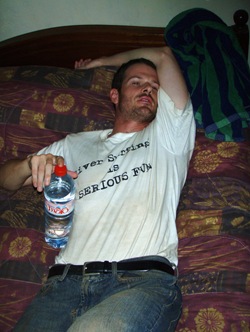 This entry was written by Steve Bouey, posted on April 24, 2008 at 8:23 am, filed under Congo, Road Conditions and tagged Africa, Congo, DRC, malaria, mud, roads. Post a comment or leave a trackback: Trackback URL.