Hello From the top of the World

Hello everyone! I hope the new year is treating all of you great. It is really hard to imagine that it is 2008 and Steve and I have been on the road for nearly a year now. Over the course of that year, we have covered nearly 28,000 miles and passed through many different countries. Every single mile we have driven and each of the countries we passed through have been milestones in their own right, but yesterday we reached a big one. A lot of people thought we were out of our minds in attempting to reach the North Cape in the middle of winter… a lot of people thought we were out of our minds leaving on this trip in the first place I guess, but I have to admit, North Cape was definitely a bit out there, I mean up there. It was not easy or cheap and in the end we had to pull a few strings to actually get there, but we successfully made it as far north as we can drive in Europe. There is one point that is technically one kilometer farther north, but North Cape represents the farthest you can actually drive in your own car and considering it is only about 1,300 miles from the North Pole, it is good enough for us. It is not too often you can say you drove all the way from the cliffs of Cape Otway overlooking the Southern Ocean to the cliffs of North Cape overlooking the Arctic Ocean in one trip… halfway around the world north to south.

The roads we encountered on our journey north were in pretty good shape. The road surface has been snow-packed and covered with a thick layer of ice, but the roads are open and for the most part, they did not hamper our progress. This is kind of ironic because I am now writing this blog entry stranded in Hammerfest, Norway because the roads leading north and south have been closed due to extremely high winds… we were supposed to make it to Tromso to catch a ferry south but have been informed the roads will be closed for the remainder of the night thus forcing us to alter our plans. The lack of daylight has not really been a problem either, although it is like being in a recurring episode of the Twilight Zone. It has been cold, but Sweden, Norway and Finland are actually experiencing one of the warmest and driest winters on record… maybe Al Gore is onto something. So, given all of the conditions that worked in our favor, we were extremely shell-shocked to find that the road was closed just 12 kilometers from the Cape. 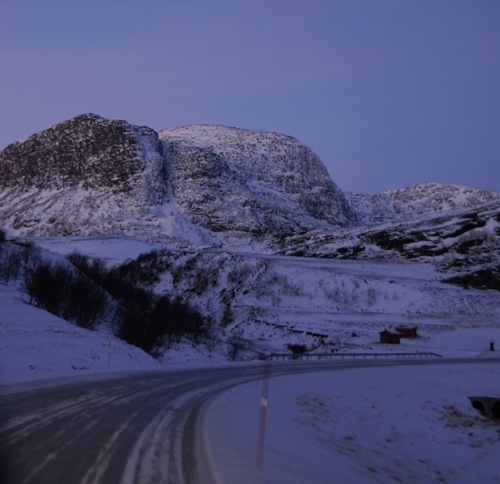 When it is light out, you realize you are in a pretty remarkable place

Ice on the road catches the headlights of the Tundra

We backtracked 30 kilometers to the town of Honningsvåg where we were informed that the road to the Cape is essentially closed to private vehicles for the winter. When we heard the woman at the information center say "essentially," we knew that there was still a way up there. We found out that there is a bus that takes tourists up to the Cape once per day, but taking the bus would obviously mean leaving the Toyotas behind. The fact that busses are even allowed up to the Cape in the middle winter we were told is pretty rare and they have only been doing it for about three years. After a little more poking and prodding, we found out that a few times per year, private vehicles are allowed up to the Cape, but only in an escorted convoy… a snowplow leading the way and a safety vehicle bringing up the rear. It was beginning to sound like the 12 kilometers to North Cape past the point of no return was the most dangerous stretch of road in the world. 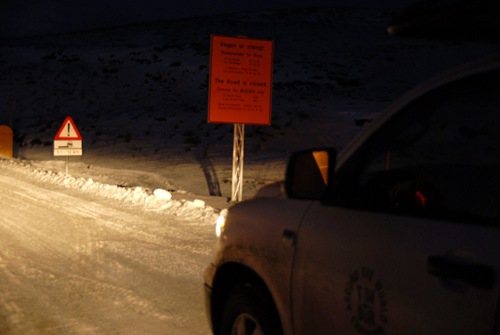 We thought we had made a very long trip for nothing

After a little more Q&A at the information desk and a few phone calls, we found out that if we wanted to go up to the Cape with the Thundra and Little Pepe, we could arrange for the escort the next day. We also found out how much it cost, but surprisingly enough, the price of hiring out the snowplow and the driver was about the same as the cost of the bus ride! Cost of the bus ride for three people = 2,100 NOK. Cost of the snow plow escort = 3,000 NOK. We hade made it this close and although we are totally broke, we knew we had no choice but to cough up the cash for the escort to the Cape even with the weak and beat-down US dollar bringing us only a touch over 5 Kroner.

The next morning, we went back to the Royal North Cape Club offices to pay for the plow only to find out that we had been "misinformed" about the price. As part of the escort, we would also have to pay 1,800 NOK per hour for the safety truck. We still had no choice. We had to do it. It would be one of those decisions that you would regret for the rest of your life, although at $41 a kilometer for 24 kilometers of escort, the decision definitely hurts in the near term. Obviously, cost precludes a lot of people from driving their cars up to the Cape in the winter. Cost, coupled with the fact that the Norwegian road authorities only made the decision to partially open the road to escorted traffic three years ago, means that you can basically count on your hand the number of people who have driven up to the actual Cape in the winter. After Steve swiped his credit card, we were informed that we were officially going to be the first Americans to drive our cars up to North Cape in the middle of winter. The decision to pay the money and go for it was already starting to pay dividends… now we just had to make it up what seemed like the road of death. 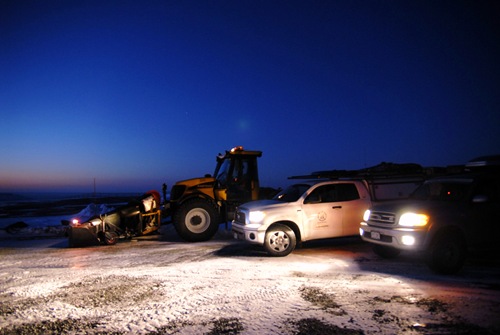 Ready for the Cape

In the end, the road of death was far from it. It was icy and snow-packed and if you made a mistake, there were no guardrails to protect you from a 600 foot plunge off a cliff into the icy depths of the Arctic Ocean, but we have seen worse. So we made it… 71 degrees, 10 minutes and 21 seconds north latitude and we made it just as the sun was starting to set for the day, further rewarding us with an amazing backdrop. "Not too many people in their right minds drive up here in the winter," we were told by a man who referred to himself as the Nar-Viking. Well, obviously we are all a little "off" here at TWBR, but we can now claim the title of being the first Americans to successfully make it to the North Cape in our own vehicles in the dead of winter. 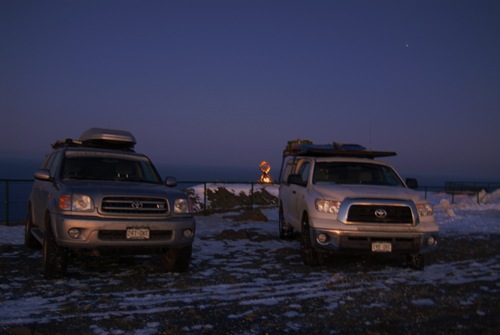 The North Cape marker and the Arctic Ocean behind the trucks 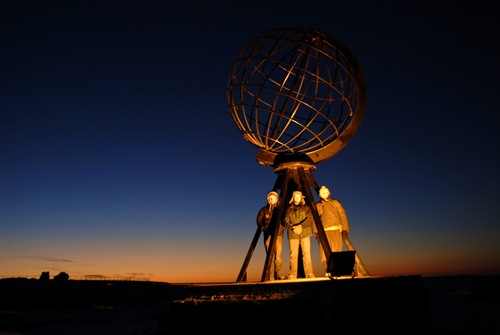 This entry was written by Steve Bouey, posted on January 4, 2008 at 7:23 pm, filed under Expedition Updates, History, Norway, The Toyotas, World News. Post a comment or leave a trackback: Trackback URL.