You Guys Have it Pretty Easy

This is a statement we get from a lot of other travelers we meet on the road. The Toyotas stand out like a sore thumb anywhere we go and within minutes of parking them, whether it be at a guesthouse, a border crossing, a national park entrance or a popular attraction, we find ourselves deep in conversation explaining about what we are doing. Everyone we have meet thus far has been extremely excited about what we are doing, but from time, a few throw out a "you guys aren’t exactly roughing it" type comment.

True, we are by no means roughing it. If I wanted to get down and dirty, and really rough it, I would have done something like Rory Stewart and walk across Afghanistan shortly after the fall of the Taliban –  The Places In Between

. In our case, we have the luxury of driving two nice big comfortable Toyota SUV’s and also have the comfort of packing a lot of what some people might think to be unnecessary gear in the ample space of the Tundra. We have SCUBA gear, climbing gear, camping gear, and yes a folding table and half a dozen camp chairs as well. So yes, we are not exactly roughing it… but at the same point, the Toyotas are my home for the next two years and most people generally want to have nice things in their homes. Furthermore, we set out on this trip not to see how tight a budget we could stick to or try to stay in the cheapest, dirtiest, grimmest guesthouse we could find in every city. We set out on this trip to drive around the world and with that, a whole Pandora’s Box of different challenges quickly presents itself.

When most people travel, they typically only have to find a means of getting themselves and a few pieces of luggage from point A to point B. When we travel, we not only have to figure out how to get to the next destination, but do so with two trucks and a lot more than a few bags. The other day, we set out early in the morning to cross the remote Laos/Cambodia border at Dong Krolor. This seemingly simple task proved to be quite an adventure and illustrated to some people traveling with us just what we are confronted with when you travel TWBR style.

According to the Canadian Automobile Association, in Laos, the "frontiers are closed to individual tourist vehicles." The CAA said the same thing about Cambodia, but we got in and we have been in contact with others who have not had any trouble getting into Laos with their own vehicles. However, after our experience at the Vietnamese border, you can’t really count on any of this information with absolute certainty, so driving out to this remote border was a gamble to a degree. We are also learning not to assume too much about what in most cases could be considered reliable information. At Stung Treng, people who had made it through from Laos said there was a bridge across the river, the map we purchased in Bangkok indicated there was a bridge across the river and Lonely Plant even mentioned the completion of such a bridge "sometime in 2007."

Once we did arrive in Stung Treng, we followed the newly constructed, Chinese built road right up to the entrance to a new bridge that looked as though 10’s of millions of dollars had been spent on its construction. At the entrance to the bridge, we were greeted by some official looking military type guys (official by Cambodia standards at least) who through the help of their 14 year old son/translator, informed us that the bridge was closed and would not open until the Prime Minister came next month to cut the ribbon and make it official. They were also waiting to finish the last few bits and pieces of the bridge until the PM could fit it into his schedule to officially open the bridge. If we did not have the trucks, we could simply hire out one of the many available boats like most other people do, but alas, we found ourselves scrambling to try and find out how to get 10,000 lbs. worth of Toyotas across a sizable, monsoon swollen river. 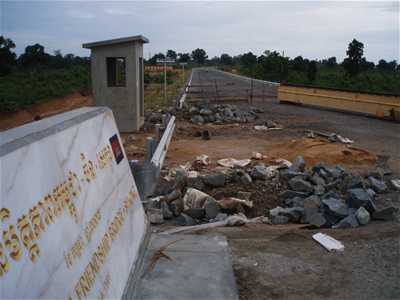 It took an extra day, but we were finally able to get some riverboat entrepreneurs to allow us to put the Toyotas on their ferry after negotiating a price through yet another interpreter. (We would soon find out that these guys wanted to renegotiate after we had made it across and even another 50 kilometers further to the border checkpoint.)  Once we made it out of Cambodia and into Laos, thankfully, the only problem caused by the vehicles and the Carnets was disturbing the Laotian customs officials from their lunch. 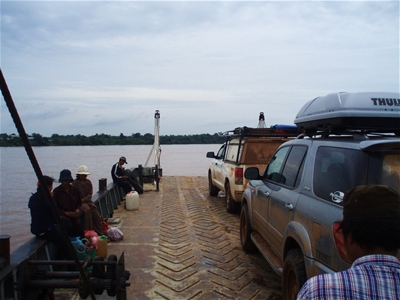 At this point, if we did not have our trucks, we could have jumped on a bus bound for towns such as Pakse, or Vientiane. Instead, we were trying to figure out where we were going to get gas for two trucks that did not have enough to make it to those destinations. After running the Tundra for 20 miles after the computer informed us that the fuel range was 0, we found a gas station. However, gas stations in this part of Laos are not your typical Shell stations. Again, we are confronted of trying to make a determination if the fuel in old rusted out 55 gallon barrels is actually fuel and if it going to help us get to the next big town or stop us dead in our tracks. Bottom line, I will be the first to admit that we have a pretty plush set-up. At the end of the day, we can sit in comfortable chairs, and watch a DVD on our oversized laptops, but after what we go through in a typical day, I think we deserve it… at least a little bit. 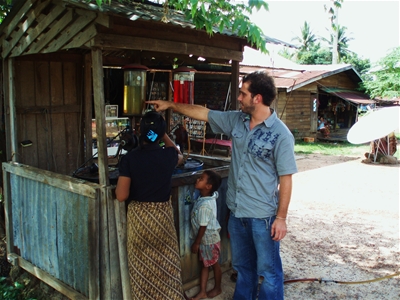 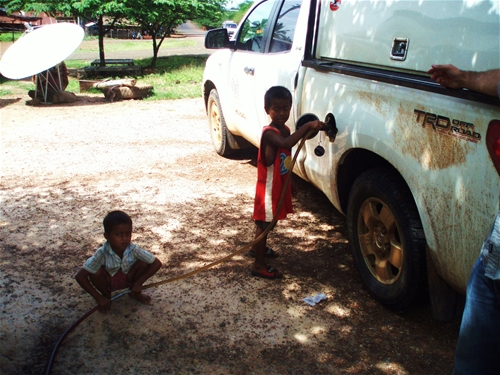 This entry was written by Steve Bouey, posted on August 4, 2007 at 10:00 am, filed under Cambodia, Laos, The Toyotas. Post a comment or leave a trackback: Trackback URL.