The World by Road is an expedition that has successfully circumnavigated the globe through 68 different countries, over 6 continents, covering 70,000 miles.  Two years from the start of the expedition, the crew has returned from this epic journey to Denver, CO. Our circumnavigation of the world went from North to South and East to West, spanning the farthest reaches of the road in all directions on the continents. We are currently catching up on editing video, photos and blogs, so stay tuned, the best of the content is yet to come. We are also working on a feature length documentary and book, so look for that at the beginning of next year!

Also check out our full list of The World By Road sponsors.

Currently In:
Denver, Colorado, USA
WE HAVE FINISHED! 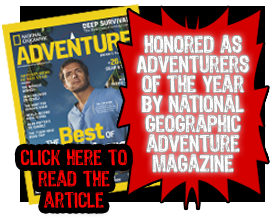 Here in the United States, fresh off a long holiday weekend, many of us are recovering from tryptophan hangovers. On paper it sounds exotic, but an overindulgence of Thanksgiving turkey is hardly anything compared to a dose of caterpillar carcass fungi, who’s viagra-like effects are apparently worth killing for. In the spirit of this gluttonous […]

Driving around the world just got a little bit easier, at least one of the roughest 110 kilometers did. A major segment of the Republic of the Congo’s National Highway 1 has recently been completed and the route from Pointe Noire to Dolisie is now actually deserving of the designation highway. Back in 2008, it […]

What is a cultural neighborhood?- It’s short notice, but you can find out today.

In Denver, there is a cool email service called “This Week in Denver.”  It gives updates on the latest and greatest events Denver has to offer each week. The great thing about the service is that most of the events are something unusual that might be completely off the radar.  They definitely do a good […]

Harness the Sun in a Bottle

Everyday new NGOs and non-profits are started with elaborate goals to change the world.  Their lofty goals often fulfill western ideas of what the 3rd world needs. The Isang Litrong Liwanag (A Liter of Light) project set out to create something that is simply useful–light in the homes of those who cannot afford it. Instead […]

On October 31st, 2011, the world’s population eclipsed 7 billion people and although it’s purely coincidence that this milestone was achieved on Halloween, the thought of sharing the world with 6,999,999,999 other people can be a scary one. It’s hard to say exactly when baby 7 billion was born, where they were born and just […]