Everyone Should Have An Entourage

I do not know about you, but every now and then, I wonder what it would be like famous. I wonder what it would be like to have a crowd of people follow you around, to have people come from miles just to catch a glimpse of you. Well, I guess I got a pretty good dose of that in Mali. We left the hustle and bustle of Mali’s capital city and headed out to a small village about 300 kilometers away from Bamako and on the road to the middle of nowhere… Timbuktu. The small village we stayed in, N8, was just outside a bigger village, Niono. I do not know the significance or the nomenclature of the village… maybe it is because it is the eighth village you pass as you head north from Niono on one of the many irrigation canals fed by the Niger river, but nonetheless, this is where my entourage was waiting. 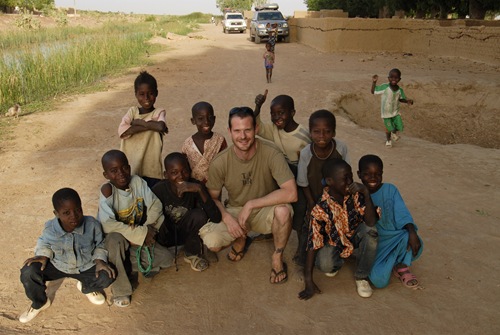 And so it begins…

Within minutes of our arrival at N8, curious villagers gathered around the trucks, wondering just who it was that had pulled into their village. It did not take long before half a dozen kids exponentially grew into what seemed like hundreds. Everyone was smiling and wanted to shake our hands or give us a high five. The situation became even more chaotic when we pulled out the video camera to shoot some footage of life in the village. 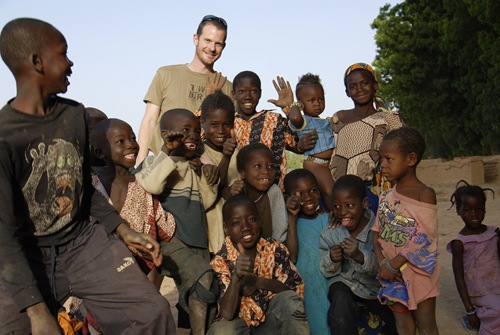 The crowd gets bigger…

The people of N8 are seem happy and at first glance appear to be healthy, but N8 is a poor village and there is definitely the sense that people here are living day to day. It also became pretty obvious that people in the village, especially the younger children, had not seen too many white people. It was also obvious that not too many of them had seen a TV, and definitely none of the children had seen themselves on TV, which made us all the more popular. In fact, it was actually pretty hard to get any shots of actual village life because everyone wanted to look through the video camera. Even though trying to film in the village was a bit difficult, all of the smiles and laughter made up for it. 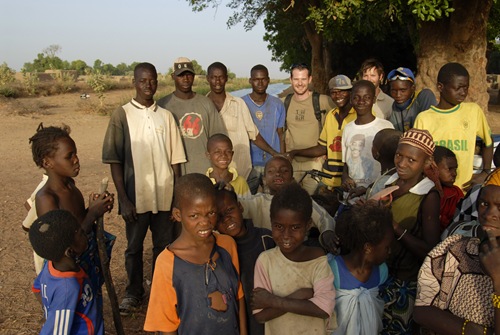 Older villagers get in the mix

It did not take long for us to make many new friends in the village, and we were a huge hit with the children, especially after I attempted to play soccer with a few of them. I guess it is the thought and effort that counts because after my failed attempts at trying to juggle a soccer ball, I could not go anywhere for the rest of the time we spent in N8 without at least three children holding my hands and another 20 to 30 following right behind. Everyone was willing to help us out and even the simple task of going to the village well to fill up our water containers attracted a large crowd of children. 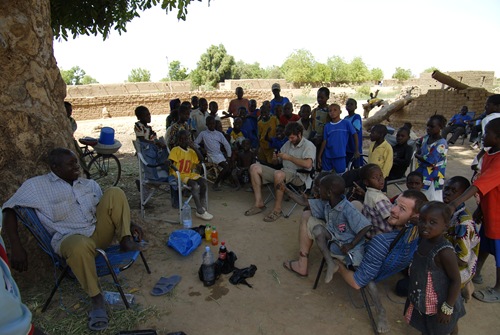 The TWBR camp was a popular place

If anyone was annoyed at our presence, it might have been some parents who did not appreciate the distraction we offered to their children who were busy with the day’s chores, but even they looked on with great curiosity and cracked a smile when they saw us walking by… it was hard to miss us because we had so many kids in our entourage, we actually kicked up a sizable cloud of dust! When we did finally get a chance to sit down and take a break from the sweltering heat of the day, the younger children would scramble to find a spot on our laps or beside our chairs. Famous celebrities might get annoyed with all of the attention surrounding them, but for us, our 15 minutes of fame in N8 was worth every minute of it. 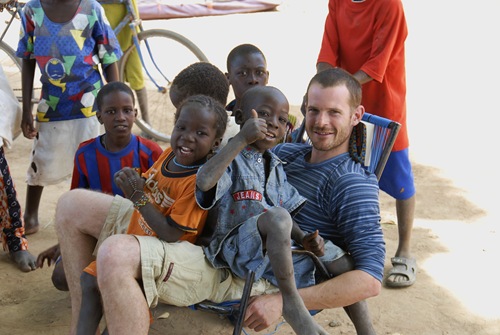 Now this is my type of entourage

This entry was written by Steve Bouey, posted on March 23, 2008 at 10:45 am, filed under Africa, Mali, Trip Thoughts and tagged Africa, children, entourage, Mali, Niono, village. Post a comment or leave a trackback: Trackback URL.