Out of This World Off Roading

Even though some of the toughest and most stressful segments of our expedition have revolved around the conditions of roads we have traversed, traveling down those difficult sections of roads can also lead you to some amazing places. Places that are hidden and inaccessible to someone without a 4×4 and in some cases a large set of balls. In a lot of the countries we have been through, we did not have a choice of whether we wanted to go off road or not. Going off road in many places is simply the only option to get from point A to point B. However, we have reached a point in the expedition where, for the most part, we can stick to paved and maintained surfaces all the way back to the States. Taking the off road route now has become the optional route. However, since we are both gluttons for punishment and more importantly curious about places that are in large part inaccessible to most, we still decide to go off road when we can. If and when you do manage to get to some of these well kept and preserved secret places, you find that the trials of getting there are usually worth it.

One of these places is the Sierra de Calalaste in northwest Argentina. Our traveling companion Fernando had been to this part of Argentina a few years ago and had stories of remarkable landscapes and natural beauty. This part of the country is remote and few foreigners, let alone Argentineans, actually get to see the beauty that this section of Argentina holds. Large untouched salt lakes. Picture perfect volcanoes and lava flows. Dramatic mountains that tower 6,000 meters in elevation over ancient sand dunes and deserts. But in order to witness these landscapes, landscapes that more closely resemble something out of a prehistoric or Martian movie set than anything from this planet, you need to be willing and able to brave the tough roads that lead you there. It was a nice juicy carrot at the end of a potentially sharp stick filled with lots of splinters.

Even though it is the dry season, the recently melted snows in the Andes had already wreaked havoc on the major transportation routes in the northwest part of Argentina in the form of washed out roadways and stretches of highway littered with debris from torrential floods, so it was anyone’s guess what the conditions of 4×4 tracks, some so small and remote they are not even marked on detailed maps of the area, were in. The only way to really tell what condition the roads were in is to ask locals in the area when you arrive. Most of the people we asked confirmed that the tracks were there and that they were for the most part passable, but that there were some difficult sections that could be problematic. When we consulted the National Police in charge of the region, they confirmed that the road was in fact problematic in spots by having to rescue a group of people stranded in two Toyota Hilux 4×4 pickups that had become bogged down in the sand 30 kilometers into the track. These guys had a winch and two well suited vehicles and still somehow got stuck to the point of having to hike 30 kilometers to get help. Our only consolation… they were headed uphill and we would be going down. However, that was not to say that other sections would not end up having us headed uphill in deep volcanic sand.

It was decision time. What choice do you make when people essentially tell you that the road is just as passable as it is impassable? Easy, go for it. We had seen some pretty bad stuff before, so we thought we were well prepared for whatever the Argentinean terrain would throw at us. Remember, in order to see some of these places, one of the requirements from time to time is a large set of balls.

The road proved to be pretty rough. It was not the most difficult or technically challenging road we had been down in the Toyotas, but it is pretty safe to say that it beat them up the most. Rough corrugation, softball and bowling ball sized rubble, sharp volcanic rocks, dry cobbled lakebeds and extreme elevation all took their toll not only on the trucks but on the drivers and the passengers in them. By the time we made it to the section where we thought the Hilux group had become stuck, it was getting dark and we were starting to get stuck too. Instead of trying to fight it through the section of sand in the dark, we decided to set up camp. The only problem for us was that we were a) stuck on a road perched on the edge of a volcano with no place to pitch a tent b) sitting at an elevation of 4,400 meters and already showing the signs of altitude sickness, and c) were about to spend the night in a area where the expected nighttime temperature was reported to go down to minus 15 degrees. It was time to see how big those balls were. 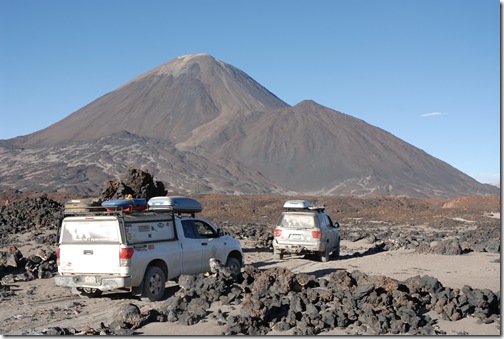 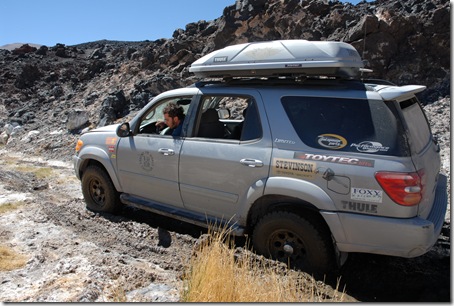 In the morning, we woke up dehydrated and light headed from the altitude and a little cold from the freezing overnight temperatures but once we scraped the frost from the trucks, we were able to plow ahead through the sand. Luckily for us, it only necessitated a few thoroughly exhausting minutes of pushing and digging in order for us to continue on down the road and through arguably some of the most dramatic scenery we had come across on the expedition. The road was tough at times and combined with the altitude, it made for a tiring experience. In the end though, the team held strong and more importantly, so did the Toyotas, enabling us to see a part of Argentina and a part of the world that not that many people have seen in their lives or ever will. 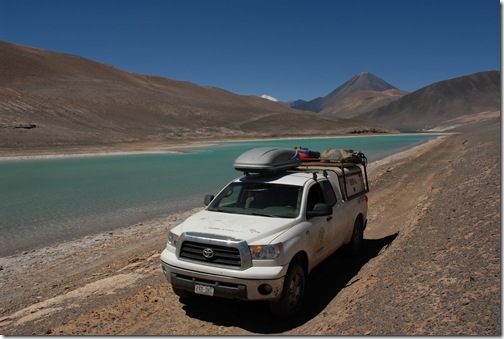 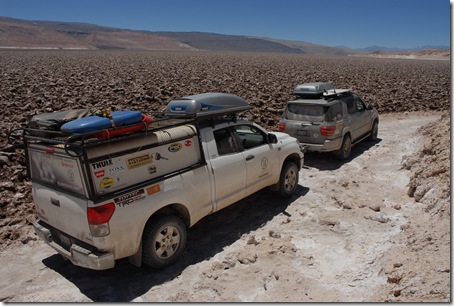 Sometimes people question why we chose to drive around the world in big, gas guzzling 4×4’s. There are definitely times when I wish we were getting the fuel economy of a Toyota Prius, but the downside of a Prius is that it will not even get you close to some of the places we have been to on this trip and for us, that is reason enough. After seeing the photos of the places we have been to in our 4x4s, it is usually enough of a reason for the people who raised the issue in the first place as well.