Machu Picchu, The Lost City of the Incas, one of the seven wonders of the world. The name Machu Picchu alone conjures up romantic images of exploration and historical discovery. Unfortunately for me, Machu Picchu only aroused a mild level of excitement, mostly due to its aforementioned notoriety.  The seven wonders of the world, (although it now seems as though inclusion into this elite list is purely the result of a subjective internet popularity contest more so than the actual historical or architectural significance of these locations, especially since there is now a seven natural wonders list, a seven manmade wonders list, a seven modern wonders list, etc.) are without a doubt some incredible places, but international fame and recognition for these relics of human achievement and natural beauty is a double edged sword. Personally, I feared that in the case of Machu Picchu, as was the case at the Great Wall of China, all of the preconceived feelings I hoped to experience while exploring such a place; exoticness, mystery, awe, reflection, would all be drowned out by the voices of thousands of other tourists thus extinguishing all possibility of an intimate encounter there. To compound the matter, Machu Picchu is geographically inaccessible by private vehicle which means we would not have the flexibility we normally enjoy with the Toyotas and along with everyone else, be at the mercy of the timetables of the local train to Aquas Calientes. I am sure Hiram Bingham knew that his discovery in the mountains outside Cusco, Peru in 1911 was extremely significant on multiple levels, but I wonder if he could have imagined that less than a century later, over half a million people a year would be wandering around the grounds in what is arguably the most popular tourist attraction in the world. Still, Machu Picchu was definitely a place I wanted to at least see once in my lifetime and it would be silly to pass by so close without giving it a chance, so I proceeded with guarded optimism.

We did have one thing going for us and that was the fact that it was December and it was now the off season for touring Machu Piccu because it was also the rainy season in this part of Peru. I think we all hoped that the rain would somehow dampen the will of a lot of other people planning on making the journey out to Machu Picchu and that only a fraction of the 2,500 average daily visitors would be there when we arrived. It was a reasonable assumption and it had paid off before in Cambodia when Steve and I had the privilege of exploring the ruins of Angkor Wat during the rainy season pretty much in complete isolation. The rainy season did succeed in whittling down the tourist numbers quite a bit that day, however, it also served to obscure any of the postcard panoramas of Machu Picchu we had all come to expect and had been anticipating on the ride there. When our tour bus reached the top of the narrow, switchback studded road from Aguas Calientes also known affectionately as the Hiram Bingham Highway, the entire lost city of Machu Picchu was pretty much lost once again, this time in a thick blanket of cloud, fog and mist. It was a bit of a let down, and I could hear some other people on the bus complaining about how Machu Picchu was the pinnacle of their two week vacation and because of the weather, they would not be able to take that “perfect” photo to prove to all of their family, friends and coworkers back home that they had actually been there. 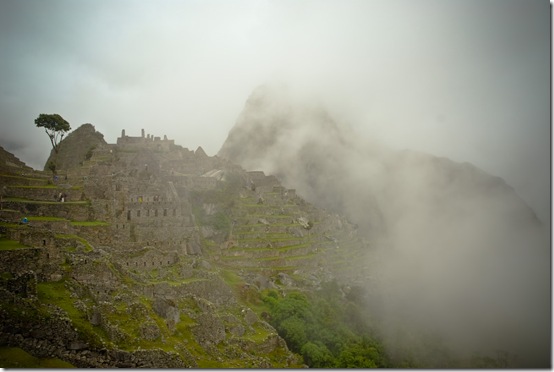 Fog obscures most of the city of Machu Picchu

Before coming to Machu Picchu, the buzz going around the hostel and much of Cusco was that the hike up to Waynapicchu (the large, ominous, jungle covered mountain towering behind the lost city in most of the photos of Machu Picchu) was well worth the exhausting hike for the view it offered. Given the current state of the weather when we arrived, I do not know what kind of views we were hoping to catch at the top of Waynapicchu, but I guess for lack of anything else to see at that point that at the bottom, we all decided to head directly to path to the top. It was obvious at the bottom of the trail that the combination of steep jungle track and jagged steps carved out of sheer vertical cliffs equaled one difficult hike to the top of Waynapicchu. The signs at the entrance gate strongly suggesting that anyone with a heart condition seriously reconsider the attempt also reinforced our initial assessment that it was a bitch of a hike. Due to the steepness of the trail and the limited space to maneuver, even in the high season officials only let 400 people a day up to the top of Waynapicchu… 200 at seven in the morning and another 200 at ten. That day, there were only about 20 of us standing in the morning drizzle, each of us searching the face of the person standing next to us for some confirmation that the hike to the top was actually going to be worth the effort it necessitated. After printing our name, passport number, age and nationality in the guest register (although it probably serves more as a listing of personal information for local authorities should someone not survive the climb to the top or the climb back down… several tourists fall to their death each year from Waynapicchu),we started out on the two hour soggy slog up the mountain.

By the time we reached the top of Waynapicchu, the rain had actually stopped, but the lost city was still lost in a thick soup of fog. In fact, you could not really see much of anything which served as a false sense of security because the thickness of the fog masked the danger lurking just beyond the slippery rocks and the crumbling walls, themselves barely discernable in the haze. So here we were, 15 or so people (I do not know what happened to the other five individuals who were in line earlier that morning) sitting on top of a damp, slick, mossy rock the size of a broom closet that was balanced precariously on the top of a narrow mountain surrounded on all sides by a thousand meter vertical cliff.  Everyone who completed the climb to the top was now jockeying for a position on the rock only to peer into the endless white in search of any glimpse of Machu Picchu. At this point, any glimpse of the city from our vantage point we felt would redeem us in the eyes of all the other tourists wandering around out of sight somewhere down below. Hiram Bingham did not discover Machu Picchu in a day and as we have learned many times over during this trip, patience is a virtue that brings many rewards. Keeping this wisdom in mind, all of us were prepared to wait it out under the assumption that somehow, some miracle would occur and the fog would lift to reveal what we had all come to see. 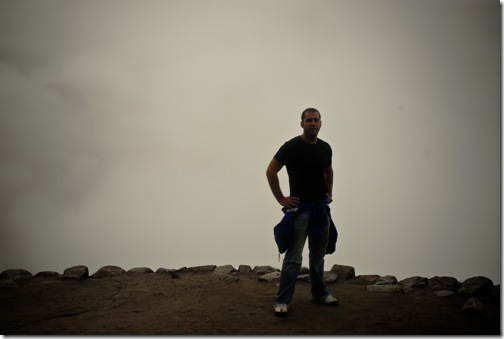 Steve posing in front of where Machu Picchu should be 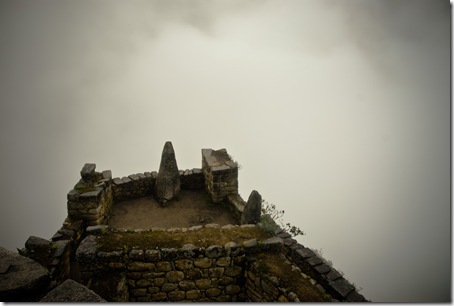 Some of the ruins of Waynapicchu 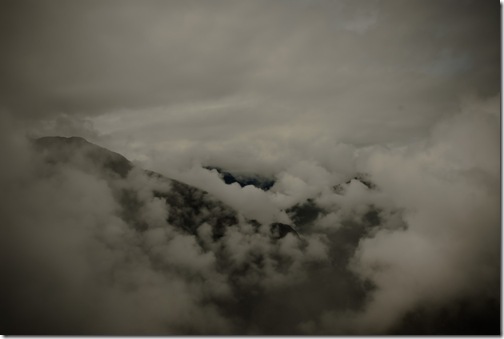 The early morning weather blocked the view of pretty much everything

It was a nervous wait on top of that rock. 15 people anxioulsy awaiting the parting of the clouds and because the rock was just about the most uncomfortable place to wait anywhere you can imagine, people were continuously shifting about. There is nothing wrong wi