What else would you expect when you are in the middle of the Sahara Desert? All of us knew that we would encounter lots of sand as we drove through the western part of the Sahara on our way across Mauritania, but I do not think any of us would realize just how much sand we would come into contact with… literally. Thanks to our friend Paul (AKA – Soloride) TWBR is now equipped with a GPS device. The GPS unit helped Paul navigate his way around the perimeter of the United States and we were confident that it would help us navigate our way through a 250 kilometer stretch of the Sahara Desert… all off-road. After a 24 hour cram session on how to use the GPS, we plotted our way points and headed off into the sand. 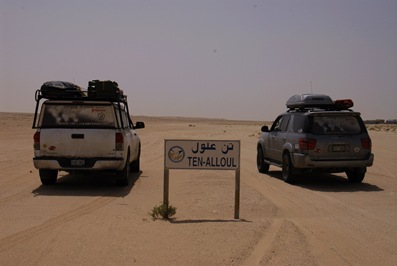 There is actually supposed to be a town here?

When we actually did stop at what the GPS unit told us was the turnoff for the “beach run,” I could not believe that I was actually about to drive off a nice sealed road and head out into blowing Sahara sand. The situation was even more logic defying given that we had talked to numerous people about the run through this part of the desert and getting stuck in the sand not once, but multiple times seemed a near absolute certainty. It did not take long for those words to prove true. In fact, it only took about twenty minutes. 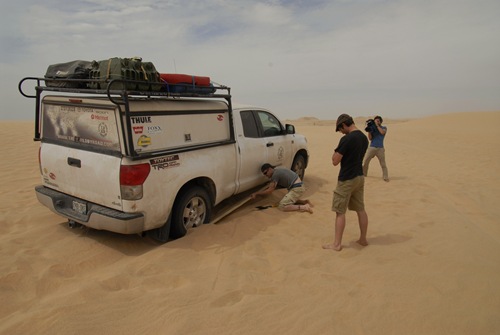 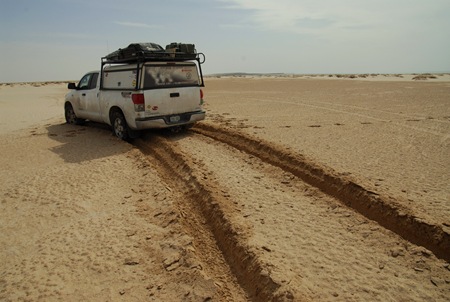 Finding some firmer terrain is always a treat

Digging your car out of the sand is hard work in any conditions, but doing it in the mid-afternoon Sahara sun with temperatures well above 40 degrees (100 degrees F) makes the task even more challenging. Luckily, we had decided to purchase some eight foot sections of wood to use as “sand planks.” When you are driving off-road in the desert, sand planks are an absolute necessity and we soon found out the benefit of spending $25 for some makeshift planks in Nouadhibou. By the time the planks had helped us out of the sand twice over the span of about two hours, I realized that it was probably the best $25 I have ever spent in my life. 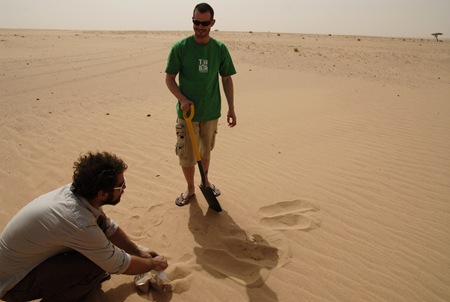 Hopefully the last of the digging… collecting Sahara sand for souvenirs

During the next three days, we probably ended up digging the trucks out of the sand at least seven times, and even though the sand planks make the job exponentially easier, I think that by the seventh time, all of us had enough experience getting unstuck to last a lifetime. Even though navigating our way through massive dunes and deceptively soft stretches of sand was a lot of work, it was well worth it. The Sahara Desert has to be one of the most beautiful places I have ever seen. Perfectly sculpted sand dunes stretch as far as the eye can see… real Laurence of Arabia type stuff. It is not too often that you can peer out over an endless stretch of sand and say that you actually drove your truck through it. We also managed to find some dunes to play on and although though the surfing has been fairly flat down most of the North African coast, we at least got to put the boogie boards to good use.

Not many people can claim they drove through terrain like this 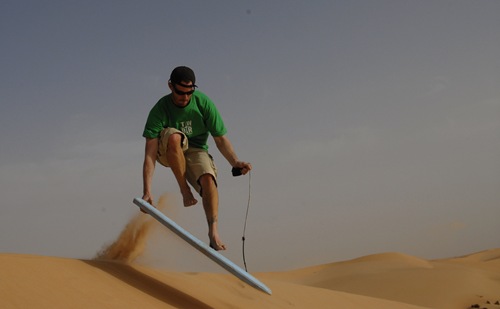 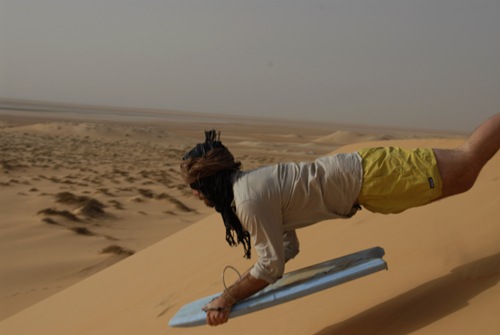 This entry was written by Steve Bouey, posted on March 8, 2008 at 6:32 am, filed under Mauritania, Road Conditions, The Toyotas and tagged GPS, Sahara Desert, sand. Post a comment or leave a trackback: Trackback URL.