Inspired by adventurer Harold Stephens, Steve Bouey and Steve Shoppman founded The World by Road, and beginning in 2007, successfully circumnavigated the globe in a 2004 Toyota Sequoia (Little Pepe) and a 2007 Toyota Tundra (The Thundra), passing through 69 countries, visiting 6 continents and covering nearly 80,000 miles in the process. With an objective to circle the world both east to west and north to south, the expedition successfully finished journeying as far north and as far south as roads run on each continent.

During the course of the two and a half year journey, the expedition team collaborated with variety of community projects ranging from endangered species preservation in Thailand to microfinance programs in Eastern Europe to produce content about some of the lesser covered stories in the world.  Between camping with nomads in remote Western Mongolia to negotiation for safe passage with rebels in the Congo, The World by Road embodied adventure, culminating in the Steves recognition as two of National Geographic Adventure Magazine’s 2009 Adventurers of the Year.  Click to read the story>>

The expedition, however, was much larger than just Steve and Steve. More than 30 people from 10 different countries played a significant role, contributing to the success of the expedition as crew members. Beyond the strong efforts of the World by Road team, countless kind, hospitable and helpful people assisted the expedition in every single country it passed through. This endeavor was a true extension of the incredible human spirit and the heartwarming generosity of people around the world.

While on the road, the crew filmed, photographed and wrote about the world.  With over 300 hours of video footage, over 40,000 photos, and hundreds of articles on the site, the Steves set out to capture the world in a raw unfiltered light.  Much of these photos and video were featured by numerous media outlets throughout the world including; The Denver Post, The Guardian, CBS, NBC, USA Today, Indonesia Today, La Nacion and the Daren Kagen Show. The support of family, friends and a loyal audience back in the United States following the journey helped to spread our story to millions over the course of the two and a half years.

Returning back to Denver, Colorado in 2009, the expedition was far from over. The World by Road Collective is the new face of our commitment to produce a wide range of compelling international and travel related content.to increase awareness and education about the important issues of our time. A nation full of critical thinkers and internationally conscious citizens is a better place to live. 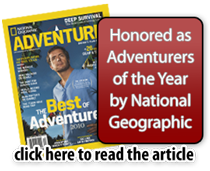